In an era where women being beaten and killed by their significant others is a norm, we need to do something that will lead to the real emancipation of women… The 8th of March is recognised globally as International Women’s Day, while this calls for a definite celebration of what women have achieved in the world today, it also calls for a deep introspection as the world, and as a country, on what we are doing wrong. Will we ever see progress if we still have time to debate on whether abuse was staged or true, when many women die daily at the hands of loved ones and strangers alike?

We are not rocks!

Let’s get this right, WE ARE NOT ROCKS. If you strike a woman she will bleed and die, because she is not a rock, she is human! I wrote an article on this 2 years ago and it pains me to have to revisit this topic with very little progress made on the matter. I have lived my whole life in a “democratic” South Africa, where women and men are said to have an equal right to life and freedom. However, at every turn I am told that I am a rock and my male counterparts aren’t. Women are not rocks! Equally so, she is not a flower or some special creature, women are as human as men are. This is important to note and internalise, for both men and women.

Dear Women: Abuse is not love!

For women, it is important that we seek the emancipation of our own minds, it is not okay to stay in a toxic relationship – even before he lifts his hand against you. Idioms and proverbs such as “malwangu ya yindlu ma tumbeta swo tala” (the roof of a house hides many things, which basically means that what happens at home stays at home), or the Setswana saying “mosadi o tswara thipa ka bohaleng” (a woman holds the knife on the sharp side of the blade, which basically means that women hang on even at the hardest of times) and the infamous, and in my opinion most problematic, “Wathint’Abafazi Wathint’imbokodo” (which we all know the meaning of)- need to be done away with. These sayings have become blankets that incubate patriarchy and abuse in our homes and communities with other women as gatekeepers. A young wife is taught by other women that rape doesn’t exist in marriage and that she is to “hang in there” through all sorts of abuse. She is constantly fed misleading advice like, “the stones thrown at her are the building blocks of her household”. This needs to stop! Society has idolized marriage and relationships so much that women will willingly suffer abuse than be known as “Umabuy’ emendweni”- the woman with a failed marriage. THIS DEFINITELY NEEDS TO STOP! Re-victimization of victims will only slow us down. We are in desperate need of in depth intergenerational conversations about the role of women and men in society as well as the socialisation of both boys and girls.

Get me right, I am not saying that the burden to solve this global plague rests on the shoulders of women- they are the victims. I am saying that we need to ensure that girls and women know that abuse, however common, is not okay and it is not love. We cannot glorify abuse in the name of strength and resistance (like rocks). We need to shun abuse! We need to make sure that women stand together and not against each other when dealing with abuse. We need to build communities that make women feel safe enough to report incidents of abuse. Women need that kind of conscientisation that opens their eyes to the fact that it is not their fault at all and it never will be justifiable. It is unacceptable and should be treated as such. We need to move away from a place of questioning what she said, what she was wearing, where she was and with whom, what time it was and start by believing and supporting her. Granted, some people do lie about abuse, and that’s detestable! But we cannot let the exception keep us from fighting the visible crisis that abuse and femicide are. A friend of mine recently wrote that the same way women are taught to walk away when abused, men should also walk away when provoked. There can never be a good enough reason for any human being to mistreat another.

We must teach our boy children differently.

It is unfortunate that the burden of raising children lays largely on women’s shoulders, but it is also an opportunity to teach boys and girls an alternative narrative and truth. Boys will only always be boys if we do not socialise them differently. In a world where both men and women work, gender roles need to be redefined from young. The toys boys and girls play with need to be revisited. What does giving a girl dolls and miniature kitchen utensils while a boy plays with guns and cars mean? What does allowing the boy child to “boss” his sisters around mean for his future? These are things that do not have to and should not remain as they are. We must teach our boy children differently.

Dear Men: Use your voice and privilege for good.

As for the grown up boys, it is up to you to unlearn what society has taught you and learn what no one did. If your father was absent, you can be there for your children. If you grew up in an abusive home, it’s up to you to change that in your own household. Seek professional help if that’s what it takes. No excuse will ever be good enough to justify behaviour that you can change. Sadly, the person reading this will probably not be the one who needs to hear these words. However, you also have the duty to call out your friends, colleagues and family members. Use your voice and privilege to ensure that those around you are aware of the injustice in their actions against their “loved” ones. Shed light on their ignorance. Educate them and encourage them to unlearn certain behaviours. Have those difficult conversations in your circles. Before you defend yourself and say that you’ve never laid a finger on a woman, think of the many times you witnessed abuse and kept quiet. Remember that he who observes abuse in the silence is as guilty as the perpetrator.  In stead of conveniently “minding their own business”, men need to discuss an alternative masculinity that does not feed off a false sense of superiority. To be honest, women and men need each other to make the world work. And the kind of masculinity we need is one that complements the different intersectional roles of women in society.

The answer? – We should all be feminist!

Society needs to evolve to a maturity that recognises that being pro-women (feminist) does not at all imply that you must be anti-men. However, with everything built to a man’s comfort, it is inevitable that some forms of masculinity be challenged in efforts to uplift and protect women. I, therefore, dare say that the answer requires that we all become educated in the ideals of and practice feminism. 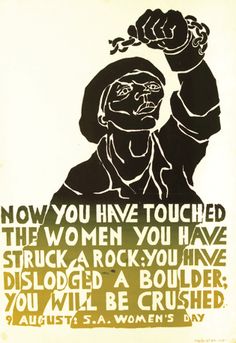 By: Kay-Dee Mashile I remember that day vividly! It was the Sunday after Module 2 and a fellow Activator lady and I were walking from…