You, middle class, will just have to eat less cheese, shop less and spend less DATA tweeting about how bad e-tolls are and save for the road you will use. Let’s just not use the poor card this time, I tried to use it but I have no evidence. The poor will not be badly affected by e-tolls, so says a UCT study.

While playing the “I am poor card, etolls will affect me” I found myself in an awkward moment after realising that e-tolling won’t affect certain card holders.

The Supreme Court of Appeal has dismissed the Opposition to Urban Tolling Alliance’s (Outa) challenge to stop e-tolling. Last year, the high court ruled that e-tolling could proceed because the Gauteng Freeway Improvement Project had been lawfully instituted.

Since 2010, e-tolling has been on everyone’s lips. This debate has become very heated after President Zuma signed the bill last month. But it seems most people don’t really know what e-tolling is about.

In a 2007 (before the implementation of GFIP) Automobile Association (AA) study reported that, because of congestion, a 1 600cc vehicle, travelling between Pretoria and Johannesburg, spends an additional 122 minutes on the road each day.

This added up to a whopping 40 additional hours in the traffic every month and amounted to about 705l of fuel wasted, as a result of 469 hours of idling. At only R11.00 per litre of fuel that is an additional fuel bill of R7 775.

Following this, the South African Chamber of Commerce and Industry released alarming conclusions about the congestions on the Gauteng freeway network. By 2010, congestion on the Ben Schoeman Highway cost over R15 million an hour. Meaning, the South African economy was losing a whopping R15 million due to the late arrival of goods and human capital in just an hour.

Business owners needed an improved network; otherwise the delivery of their goods would always be late due to congestion.

SANRAL had to act and respond to Guateng’s business and motorist needs. Gordon’s Treasury could not finance the roads upgraded and our taxes were not enough.

So SANRAL took out a loan of R20 billion and half of that loan was to be paid by Treasury.

Strong public and opposition outcry resulted in a failure to early implement e-tolling. As a result the loan kept on increasing.

Initially, the original loan was expected to be paid in June 2011 but it was not. So, Moody the rating agency showed its moods towards non-complaint debtors and downgraded SANRAL, dropping its credit rating.

SANRAL’s bad debt paying record and downgrade are bad for the South African economy and other state-owned enterprises. Its downgrade will make South Africa unfriendly to financing institutions. Finances are what we need for our infrastructure in a developing word.

President Jacob Zuma did not only save SANRAL, but also potentially the government’s reputation, because a prolonged delay in signing the Bill would have had consequences for the economy.

Research concluded by the University of Cape Town’s Graduate School of Business concluded that e-tolling has more benefits than costs for business.

Their economic analysis revealed that the impact of e-tolls on the price of food and goods will be between 0.12% and 0.77% (below 1%). And increase in fuel levy would have had more than 1% good increase.

The study says ‘International research experience suggests that, in addition to normal accessibility improvements, businesses in a growing economy like Gauteng would benefit from increased efficiency in their labour markets. This may add 30% to 50% extra to conventionally assessed benefits.

The assumption that its implementation will result in high food prices and business costs has no evidence to back it. It’s just an assumption.

Public transport like your buses and taxis will not be affected by e-tolls. Wondering why the loud Taxi Associations are quiet? Well, there you have it. And if they increase taxi and bus fares, tell them they are exempted from e-tolling.

Why not use general taxes?

Well, I don’t want to be a clever black and act like I am MR KNOW IT ALL. But is public knowledge that user fees collected on tolls are used to finance the building, the upgraded and maintenance of those tolled roads.

Taxes on the other hand are used by government for services provided to everyone and they are not used to fund tolled roads.

Now tolls allow the Treasury to have more money for other services. Saying the Treasury should have paid for the 20 BILLION upgrade costs means that you wanted them to take food from the poor and feed big-business and middle-class South Africans that will be now moving swiftly at freeways.

If the mainly rich (e-tag affording) road users refuse to pay as they use, the Bill goes straight to the poor as money for other services will be used. Oh yes, that R36 Billion bill will have to be taken from monies for others services like building schools, RDP Houses, electrification and so on and so forth.

Why not the fuel levy?

Well, if we make this argument SANRAL would have to shut down all tolled roads across the country that already exists in KwaZulu-Natal, Western Cape and Gauteng.

It’s rather opportunistic and political point scoring considering that the people in the Western Cape have travelled and had the vehicles we’re in stopped to pay in some tolling road blocks.

One of these tolls will be seen on Chapman’s Peak.

My point is, like SANRAL, the DA led Western Cape government does support the principle of e-tolling. But for political scores in Gauteng, they will pretend like they don’t.

Let’s just not use the poor card this time, I tried to use it but I have no evidence. The poor will not be badly affected by e-tolls, so says the UCT study.

The middle class and your business will just have to eat less cheese, shop less and spend less DATA tweeting about how bad e-tolls are and save for the road they will use.

As the Global Entrepreneurship Congress takes place in Johannesburg this week, Activator and entrepreneur, Nhlanhla Ndlovu examines why small and medium sized enterprise (SME) failure rate is so high. 75% of small businesses fail within the first 2 years. 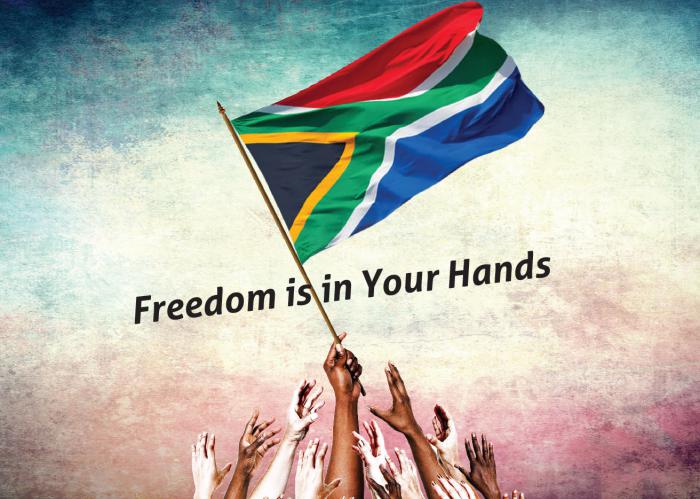 Gladys Nomvuyo Sebeko takes a look at our 23 year old democracy and comments on the implementation of various programmes and policies.