As we usher in 23 years of democracy, we are faced with serious questions as regular South Africans. I mean, with the political instability games heating up and the economic set-backs we receive from them, as we watch as our nation, up in arms marching and petitioning votes of no confidence to our current president and his irreversible decisions during his last years in office. We are forced to evaluate our current status and ask ourselves, “Is freedom, democracy?”

While talking to some of my friends, namely Bali Ntunja and Buhle Ntshinka who are doing small, big things in their communities, our  topic of conversation had moved toward politics and how that affects the little people and how they saw freedom and democracy.

The response that caught my attention was from Bali, one third of the musical act Soulbijazz and a volunteer at our church soup kitchen, he said, “Freedom and democracy are major campaigning gimmicks, hidden behind policies and procedures which still remain inaccessible to most people in the Eastern Cape. It is a disgrace really that we have come so far and our democracy is so young that we have forgotten why our predecessors took up arms and what still needs to be done.” His comment hit home more when Buhle pointed out that change is needed and it begins with the youth. We, the youth need to be individual change drivers in our own communities, saying that as history has dictated, it is either we learn from our predecessors or we fight the smart fight by working from the ground up, building our communities and strong community bonds. With the conversation rolling over, I realised there might be truth in the statement when one considers the Soweto uprising that saw students of a community take decisive action about decisions made on their behalf. They inspired a nation and a global message of a strong community.

This initiated a question on what type of leaders are we to be? What can we learn and modify to fit our era’s current struggle? And how do we move forward from the current status quo?

As we celebrate Freedom month, we need to look at our past leaders and see what we are missing. On the topic of freedom, Nelson Mandela said, “We do not want freedom without bread , nor do we want bread without freedom,” highlighting that an ultimate freedom was required where citizens are able to make decisions to better ourselves without sacrificing their freedom. This was his holistic view of freedom where equal and unilateral opportunities were afforded to everyone. He further declared that it is important not only to attain democracy but to retain it as well as it goes hand in hand with human rights. This is the solid pillar in which our ruling party is built upon, and yet it has done nothing as a single mans prerogative to shuffle his cabinet and throw years of steady ratings and investments down the tube – one mans freedom to choose. How do we then decide as a country that his freedom is greater than our democracy?

In light of all these questions, I decided to ask someone who has lived through the apartheid era, the liberation of South Africa and the Zuma era. A woman who has seen the changes and still has hope that we are an evolving state still plagued by the racism and oppression of the past, Mandiswa Sweetness Geza. Her revelations of what they, the people who elected the ANC into power expected were simple. That the poor be empowered, that the old be taken care of in their frail age and that there be no corrupt systems. Even though these ubuntu virtues have been harshly deformed and corrupted, Mandiswa shed some light saying the struggle against apartheid was not won over 23 years, so the stability of freedom and democracy will not take 23years to establish balance.

We will only see the true strength of our nation the moment we realise that the ANC did not win the struggle only on their backs, but that the PAC, SACP, FEDSAW and SAIC (to name a few) were their supporting allies. This proves that unity in communities is the beginning.

To move forward as a nation we need to learn from Mandela’s humanity, Hani’s compassion for his fellow people and from Uncle Cathy’s steadfast belief in the young people of this country. We preserve their memory by uprooting corruption and discrimination in our community leaders because if we hold the leaders of society accountable, fostering accountability on a national level will be achieved because we put people who put us first in leadership roles before the benefit of the rich. 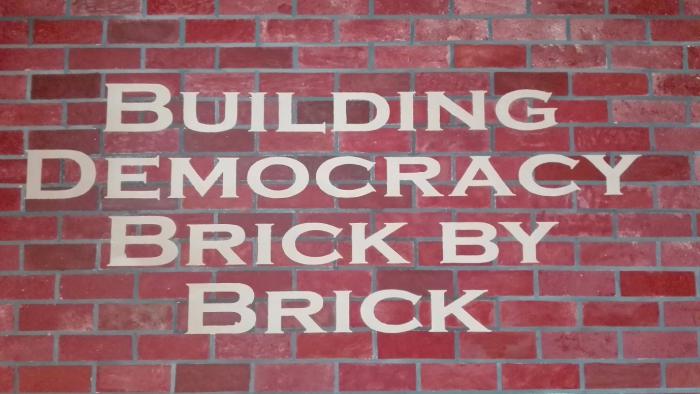 Mbasa Gqokoma unpacks some of the challenges with Tsepo Ya Rona Mofokeng around how far we have come in sustaining our democracy and freedom.