In a bid to build social cohesion, Gauteng and North West based activators hosted inaugural community empowerment event through sports, Kick a Ball for Rural Communities in Hammanskraal North West  on the 15th of August.

Kick A Ball For Rural Communities is a one of many projects of youth in sports, Foundation of Sports Alchemy (FOSA) which is led by two Activators, multiple youth empowerment program facilitator, David Lekgwathi from East Rand in Johannesburg and social entrepreneur and Activate from Eersterut in Pretoria. Donahue Adams

FOSA’s major objectives of the event are to use sports as a tool to help the community to confront social normalized abusive patriarch norms in the community. Most importantly, the organizers’ hope that the tournament will accelerate youth structures relations with government, business and civil society organizations in these fields education, entrepreneurship, leadership, sport, innovation and job creation sectors of South Africa.

Lekgwathi said they decided to use sports as a tool to empower and unite rural communities. They collaborated with other activator led organizers Liberty Youth Movement and Network of Entrepreneurs Readers and Designers in Africa (NERD Africa) and the Adams’ family generosity. ”Foundation of Sports Alchemy could not have made it this far without Marcel Adams Memorial and Activate support.  Words can never ever clearly describe our gratitude to all those organization and individuals. I pray that all minded Africans throughout can continue rewriting motherland’s story.”

He went on to say looking back at the event “I am very happy with the outcome of this event because we use sport as a single unifying factor that has emerged, uniting nations behind the various sporting codes and events, despite the barriers which often divide them and we also invest in our youth and in our communities, we are building a solid foundation for future leaders by empowering and uniting them through sport. This is just a beginning of many of great things to come. I think it is also important to highlight that other stakeholders are welcomed to join us in our quest of unleashing youth excellence in so called disadvantaged neglected areas of this country.”

The tournament activities included football, netball board games, chess and the dialogue. All these activities aim was to give the community a chance to raise their concerns about issues that affect young people in their communities and together find solutions for those problems.

During the dialogue, (which was focusing on how can the community members use sports as tool for change and transformation) community members highlighted substance abuse, illiteracy, youth despondence, unemployment, alcohol abuse, crime, gambling, teenage pregnancy, school drop outs, and lack of sport facilities and some the serious youth challenges in the community.

Some of the prominent individuals who attended the event include community scholar John Mkwebo, include Amatuks manager, Jarred Ace retired football legend Charles Adams just to mention the few.

Speaking on behalf of the community, young scholar and community leader, John Mkwebo urged his community members to continue being advocates and on the ground social change at all their respective spheres of life.  He said “Our sudden companionability participation in this initiative by Liberty Life Movement, Marcel Adams Memorial.  Activate Leadership, FOSA Pretoria based Bakwena Chief Executive Officer, Reginald Feinstein and NERD Africa led event has shown us that our involvement in sports activities can easily deal or prevent all our challenges as community.”

At the end of the event, the excited Carousel View based Activator and Liberty Youth Movement director, Thabang Phokungwana thanked Activate Leadership for creating a platform for positive minded young people throughout to work together in creating a better society for all. “I am very happy with everything. The event went very well. I would like to thank all Activators like Don (Adams), Dave (Lekgwathi), Duncan (Mfamadi) and Tumelo (Khoza) who made sure all this happen. Now Indeed I agree that there is power in unity. All these selfless young leaders have proved that. Most importantly I think I have to thank Activate Leadership for linking young leaders up. It is  through Activate that today burning youth issues in my community are addressed by youth themselves and all this was led by us as Activators from different provinces”

A reputable bank has already shown interest in supporting the tournament in future.

Dozens of delighted community members vowed to make sure that next year’s’ Kick a Ball for Rural Communities (13th August 2016.) will be bigger and better.

I am from Cosmo city, and I believe the government can use the open spaces in my community to build more sporting facilities so that all sporting codes can be accommodated. The government also needs to educate young people and the rest of the community on how they can access the facilities for usage. 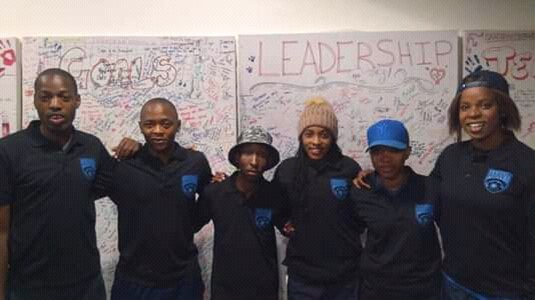