Activators Unathi Jacobs and Lelethu Godongwana are using art to unite their community as part of the ‘Outspoken Youth Initiative’, a collective of 18 artists from Gugulethu, Khayelitsha and Philippi who are driving change through music, dance and visual art.

The group first came together in 2008 to create awareness around issues affecting the community. They started by holding anti-crime park jams at the Vincent Ntunja Basketball Court at the Gugulethu Sports Complex.

‘Instead of using our influence to get girls, etc, we wanted to use our power for good,’ said Godongwana. ‘As musicians, many of the songs we write are inspired by a burning issue with the aim of raising awareness, but we also want people to act on that awareness. The park jams were created to help provide this other half.’

The park jams received a huge response with more than 500 people showing up to support and participate in the festivities. The concerts became so popular that the event made the news last year when they hosted a huge Youth Day concert on June 16 which focused on uplifting the youth and collecting food to donate for Mandela Day the following month.

‘When we saw the impact that art can have on a community, we realized we can spread the support further,’ said Unathi.

With gangsterism and violence on the increase in Gugulethu, the collective made a bold move and used their influence to arrange street dialogues and invite rival gangs to participate.

‘Under the banner Artists Against Crime, we organized for gangs to come together on neutral ground – with the police and other stakeholders present – and talk about relevant issues such as drugs, revenge and traditional healers, which is a huge topic in our area.’ ‘This is where our training from ACTIVATE! was put into action,’ added Lelethu.

While the first dialogues were a huge success, the third ended in violence after the SAPS left early. The group then decided to shift their focus to youth who are already interested in changing their lives.

‘We work with boys who want to leave the gang life and try to show them what else is out there by taking them to theatre shows and into the mountains to explore other things,’ said Unathi.

Last year the group added prison visits to their portfolio when they performed for prisoners at the Drakenstein Correctional Centre (previously Victor Verster Prison) located between Paarl and Franschhoek in the Western Cape.

‘We were looking for something to do for Mandela Day and decided to visit the prison. Prisoners hardly get visitors unless organized by the Department of Correctional Services so we went and performed music, dance, poetry and motivational talks,’ she said.

This month, the group made the trek to KwaZulu Natal to perform at schools in Kokstad in collaboration with the organisation Life After Bars – a NGO working to change the mindset of community members toward offenders after they have been released from prison. The group initially planned to perform at Kokstad prison as well, but were unable to secure final approval for this.

‘It’s inspiring seeing prisoners who want to change their story and are working hard to make something of themselves after they get out. Our aim is to inspire them and let them know that when they are released, we have not turned our backs on them,’ said Lelethu.

Another project under the Outspoken Youth Initiative umbrella is a literacy project for primary school children run by Lelethu which he started in Khayelitsha earlier this year and hopes to implement in Gugulethu as well.

‘Literacy is not just about reading the words,’ he says. ‘It is about composing the message, understanding text and forming opinions.’

The literary project introduces students to a book and between chapters, learners write down what they understand from the text in an exercise book allocated to them.

Lelethu says that the aim of the project is not just to teach kids to read and understand better, but to have a knock on effect at home where parents may not be literate.

‘We see lots of problems with older people who don’t understand legal issues around land and housing for example because they don’t understand the language. So we thought we can educate the kids and in that way influence their parents and grandparents at home as well.

The Outspoken Youth Initiative formalized their organization last year when they registered as an NGO and are currently trying to secure a premises to create a resource centre for the youth and community.

‘The important thing is to create a space where they feel safe,’ said Lelethu.

For more information about the Youth Outspoken Initiative or to book them for an event, you can contact Unathi Jacobs on 074 382 7431 or ladyslice0@gmail.com.

If you would like to join the ACTIVATE! Change Drivers network, visit www.activateleadership.co.za to apply. Applications close 31 October 2014. 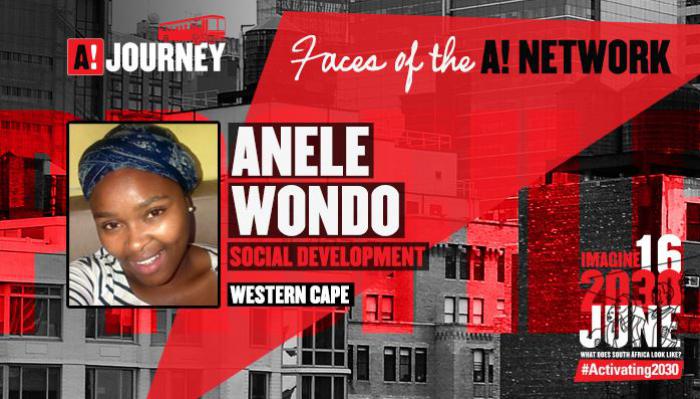 How can arts an culture be used as an intervention to curb drug use that leads to gangsterism in our communities?

Roxanne Denton is a second year Activator who is based in the Western Cape. We spent 5 minutes with her to find out what her passion is and how she has found ACTIVATE!.