Activators from Cape Town gathered on Tuesday with various other young people working towards social change, social cohesion and the promotion of human rights. The purpose of the hackathon was to unpack the problem with the intention of coming up with actionable solutions. The dialogue, convened in a recording studio facilitated by Events Project Manager Lezerine Mashaba of the ACTIVATE!Change Drivers Network. In an informal setting, young people shared real life stories and educated perspectives on the origin of gender-based violence and how a nation like South Africa can progressively move forward, healing the broken, punishing the perpetrators and educating the young ones to respect people, irrespective of their gender. “Coming from an Afrikaans background where I was taught to never question anything related to sexual orientation and gender, I found it hard to discuss any issue connected to gender violence as there was no room open for that,” said Susan, a student at City Varsity- Cape Town.

Despite the immeasurable ills the African continent has endured over the centuries, from civil war, colonialism, segregation, apartheid, slavery, and misogyny they are lagging behind when it comes to addressing gender-based violence. “Structural apartheid purposefully built shebeens within every 100m2 of the townships so that after a 12 hour working day, a mine worker could drink till they are intoxicated and return home to a wife and children onto whom they would spill-over all their frustrations of the day. Even today, we have not done enough as a nation to address how alcohol consumption contributes to gender-based violence,” said Lulama Mali. Despite all the efforts that have been made to ensure that Africa once again rises to the glory and power it once enjoyed, gender-based violence; intimate partner violence and the violence against children still reminds us that our continent is indeed ill.

According to the Mc Millan dictionary, gender-based violence (GBV) is informed by crimes involving women especially in the home by a partner, usually a male with the intention to do bodily harm which at times is grievous and can lead to death. These crimes are mostly perpetuated by men against other men, children, relatives and intimate partners who have no regard or respect for women or human beings in general. “Unlearn your ills and occupy spaces that influence you positively,” said Activator and peace education activist Mkhuseli Madiba. The gripping reality is that men also experience GBV instigated by women and the African custom and perception of a man has not created enough room for men to report these cases or even go as far as calling them a crime. This is because they are committed by women which in a patriarchal sense represents a weaker gender that cannot fend for itself, let alone harm a man.

A few years ago, the devastating and gruesome knowledge of Nkululeko “Flabba” Habedi’s death, a founding member of the popular hip-hop group Skwatta Camp shook the country. He was found dead at the hand of his intimate partner, who later turned-out to be the alleged killer. The crime was reduced to intimate partner violence – a prime element of gender-based violence. “The kind of parenting we are brought up under promotes brokenness within us, the issues of violence we now face are as a result of the kind of households we come from. Our parents need to be re-educated on how to administer corporal punishment and discipline without using a rod,” explained Sinazo Peter, Activator and social activist from “Best Dads Movement.”

According to a study by George Durankiev on 08 June 2015, there is a total of 11 countries globally leading the scourge of gender-based violence and not enough is being done to re-educate men and women on how to view one another as human beings who are equally deserving of respect and protection. At number 11 is Russia followed by Iraq and Pakistan, at numbers 10 & 9 respectively, from number 8 to 2 in chronological order we have: India, Somalia, Mali, Guatemala, Sudan, Democratic Republic of Congo and Afghanistan. The shocking truth is that a majority of the aforementioned countries are of from the African continent. At number one is Chad- a country with a tremendous history of a people who have beaten the odds just to be counted as people. They have endured economic instability due to corruption and unstable climatic variations, a country with a record of a population of 14 968 716 as at July 2017 source: Notrchad- worldpopulationrevie.com/countries/chad-population with a total 45% (6 735 922) people living below the poverty line and a population growth of 3% on average per annum. Our main problem is the proportion and extent to which we exercise culture, because African males go through a rites of passage which is conducted by other men and no education is passed onto them as to how to treat women in a society that is at most diverse.

These statistics beg the question, “What is the role that young people can play to ensure that these horror stories change?”

It is discussions and insights of this nature that called ACTIVATE!Change Drivers to take action steps against gender-based violence, “ Who determines how we should view culture, the very culture that informs violence?” questioned Kgotso Sothoane an Activator and social activist with a passion for educating people about GBV. According to activist, Brilliant Nyambi from Africa Unite: “Globalisation contributes to GBV because the same media which re-enforces patriarchal tendencies, wherein women are portrayed in a derogatory fashion, feeds into the ill desires of men.” These discussions and solution finding hackathons will spread to different corners of the country to educate people on how to review what they have been taught under a programmed  system that does not cater for the growing challenges of a country such as South Africa which is embodied and thoroughly immersed in diversity and volatility. 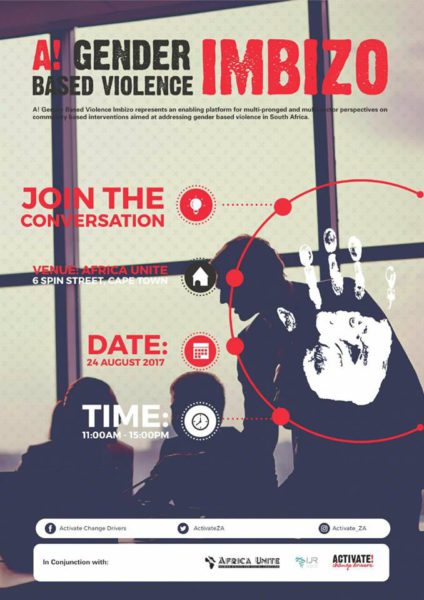