Two weeks ago, a wave of shock rippled through the ACTIVATE network, as news spread of the tragic and untimely passing of one of our own. The late Mmeza Gaborone was involved in a car accident which claimed her life and left those who knew her with heavy, heavy hearts. Lady DJ Mmeza, as she was affectionately known, was one of the Activators at the forefront of developing the A! Radio project. She started her radio career at Radio Riverside in Upington, where she grew in skill and experience to become an award winning radio personality.

Tributes came in from all across the network from fellow Activators and colleagues who knew Mmeza, including Activator Kholofelo Mamaribe, who said “She was an incredible soul. So passionate and driven, she will be dearly missed. Gone from our sight, but forever present in our hearts. I first met her in 2016 and we became great friends. Whenever we met, we would laugh, dance and talk for hours on end. I am going to miss her.”

Colleagues in Johannesburg organized a special memorial service for Mmeza on Friday the 24th of January 2020. It was held at the ACTIVATE offices in Braamfontein and Activators attended to pay tribute and to celebrate Mmeza’s life. Mbulelo Ncevu said “I have known Mmeza since 2015. I met her during the second module of our ACTIVATE Change Drivers training and we clicked. I, Mmeza and a small group of other Activators created a special bond that has lasted up to this day. When she finally came on board for A! Radio, which was something she had been talking about throughout training, it was awesome to see it come into fruition.”

A eulogy was read out which described Mmeza as “a friend, a sister, a comrade and an avid social activist. Born on the 11th of September 1984, Mmeza Gaborone lived a life of purpose and extraordinary excellence.”

Kgotso Sothoane remembers Mmeza as “the lady Jukebox”, saying “whenever we were travelling or chilling with Mmeza, she would always insist on playing the music and she would play the widest variety of music, from Brenda Fassie to Maroon Five.” He said “Although we could not go and be with the family during this trying time, we wish to let them know that Mmeza will always be in our hearts and we will forever celebrate her life.”

Khanyisa Booi remembers a publishing road trip that she and Mmeza undertook through the Northern Cape in 2015. “It was during that road trip that we got to know one another. We spent a majority of the time at the Radio Riverside station where she was working, and she shared the vision of taking radio further and beyond the small town that she was in. She was a very ambitious young woman and she will be greatly missed.”

Mme Granicious “Lady DJ Mmeza” Gaborone was honoured by Radio Riverside by renaming their most popular DJ award after her. An honour that will make sure that her legacy lives on and will be forever engraved in the hearts of their supporters and listeners. She was laid to rest in her hometown of Upington on Saturday the 25th of January 2020.

“I love working with communities and I am constantly searching for opportunities so that I can demonstrate my initiative, enthusiasm, reliability and most importantly, my creativity.” These are Mmeza’s own words in describing her work, taken from her profile in the ACTIVATE Heroes book. Mmeza’s life was one lived to the fullest, with unshaking dedication to youth empowerment and dedication. Kind, humble, selfless and ever hard working, she will always be remembered as our Lady DJ Mmeza. May her loving soul rest in peace. 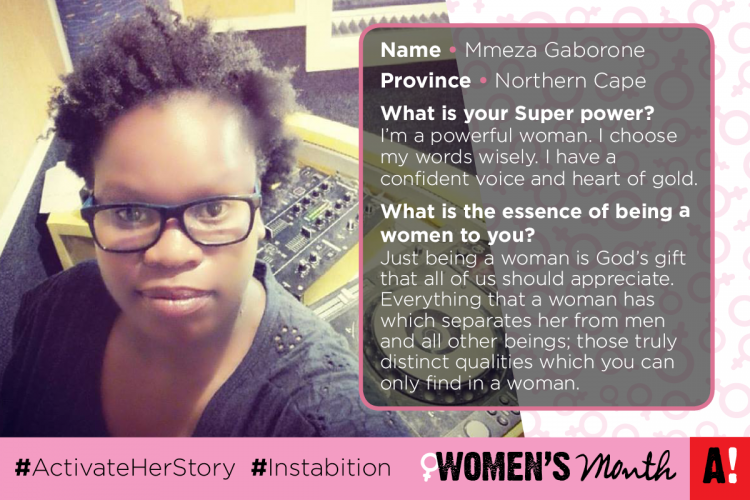 For Women’s Month, we’re celebrating and showcasing the stories and strength of ACTIVATE! Women through a photo exhibition on Instagram. Activator Mmeza Gaborone tells us what her super power is and what she thinks the essence of a woman is. Follow us on Instagram for more inspiring stories @activate_za

On Saturday, youth leaders in Upington will convene an Imbizo to discuss the possibilities around achieving a non-violent society. The Imbizo will take place on Saturday, 12 November in the Thembelihle Hall in Paballelo from 11h00 till 13h00. All community members and stakeholders are invited.