The Activate Theory of Change:
If young people are provided with a provocative platform to meet, connect AND be inspired to actively contribute to the common good, strengthen develop their abilities and skills set THEN they can be innovative and active citizens who can drive positive social, economic and political change for South Africa and the global good.

Polelo “Master P” Huma admits that when he joined ACTIVATE! Change Drivers in 2019, he did not initially know what it meant. However, as the programme progressed, the leaders and the network exposed him to new ways of doing things which “changed his life.” ACD Programme is a youth leadership development programme that brings young people together in a national network, through leadership training. These young people, or ���Activators���, are consciously and critically engaged in multi-sectoral initiatives across the economic, political and social spectrums.

Huma grew up in Soshanguve in Pretoria and his journey in the art industry started when he did not successfully complete his matric. Instead, he was one of the Top 20 finalists in the Big Art Master Competition 2018 which saw him being featured in news publications such as Rekord, Daily Sun, Pretoria Newspaper, as well as Dear Diary Magazine and Revived Magazine.�� The ACD Programme model comprises of two strategic elements, both central to the development of a young person as an agent for change: (1) residential training and (2) a wide-range of platforms and formats, geared to support Activators to increase their influence and impact. Much to our dismay, COVID Regulations begged that the programme be restructured and digitized.

Interestingly, his work has mostly focused on Gender-Based Violence – one of his works was recognised by Slam For Your Life in which he highlighted the impact of COVID-19 on Femicide. He has now entered Up We Go Mzanzi Competition in the Art Category and he’s one of the Top 5 Contestants. He aims to give back to the community when he win to uplift others who are less fortunate than him. In his bright art piece featuring the South African flag, he describes it as a signifier of the different culture we have: “the background of darkness implies that we need to light candles for the wellbeing of our country and the lives that were lost during the pandemic; it is symbolic of hope.” 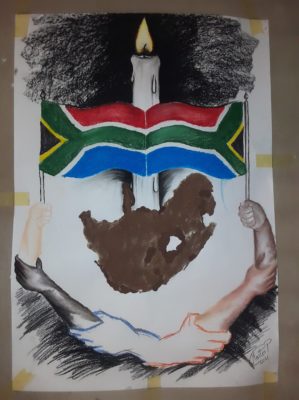 For Huma, heritage is about identity – where you come from; who you are as an African. However, he feels that South Africans are slowly losing touch of that and modernising their way of living. According to Huma, this puts the rich culture and tradition of Africans at risk of extinction and/or appropriation. Huma says “Most things are easier than done, but actions speak louder than words.” Ubuntu is part of being African and Huma’s motivation to win Up We Go Mzansi Competition is indicative of that – before we can save the world, we should check how our neighbours are doing as charity should begin at home.

To vote for Polelo Master P Huma and stand a chance to win a Tempo watch, click here

A single person with a passionate vision can change a communitys circumstances with the right intervention if they have personal insight and the necessary skills, says Chris Meintjies, CEO of ACTIVATE!

By Themba Vryman History, by nature, has always given us great lessons for our lived experiences. Either in the present or what we can imagine…