Elaborating on the function of the organization, Komape says ���Today���s society is perceived to be ill because of men. As Father a Nation we are calling on all men to become real men and help nurture the next generation which is the boy child.���

Throughout last month, ACTIVATE! Change Drivers ran a social media campaign #Includingtheboychild, which sparked conversations around considering the various challenges faced by men and the boy child; as well as looking at ways to realize a gender-equal society.

Limpopo based Activator Khomotso Komape is part of a powerful movement that has similar ideals. Father a Nation is an organization that seeks to change the notion about the boy child and discourage gender-based violence in communities with their various campaigns and their motto #NoExcuse. Elaborating on the function of the organization, Komape says ���Today���s society is perceived to be ill because of men. As Father a Nation we are calling on all men to become real men and help nurture the next generation which is the boy child.���

He adds ���We have driven massive change in communities that we are operating in, especially in rural area where they do not have as much information on gender based violence and the solutions to it.��� Komape says that it was when he was a participant at a men’s camp back in 2019 that he spotted and invited on board by the CEO of Father a Nation.

Today, Komape is a strong advocate of developing young boys, saying ���I believe that the issue of the boy child is very key and needs our careful attention as young adults and grown men. The boy child needs to be guided and taught how to navigate society and the different challenges that come with being a boy child. Hence one of our pillars at Father a Nation exists, which is called ���Champion mentor���. It involves more mature men mentoring younger men and boys to live better lives and avoid making the same mistakes that they themselves may have made in their own lives.

What is your view on ACTIVATE! Change Drivers running the #IncludingTheBoyChild campaign?

���Personally, I think it is good and also helping to change the narrative and notion of how men and the boy child are viewed in society. Although efforts are currently being made to include the girl child in spaces where she was previously excluded, equal efforts need to be made also to not overlook the boy child and exclude him from crucial spaces and conversations.���

Komape is proud of the impact of his work and when we asked how he hopes to expand the reach and impact of the work he does with Father a Nation, he says that he recognizes the power that the ACTIVATE! Network has and would like to partner with ACTIVATE! In future to organize campaigns that fight against gender-based violence and similar social ills.��

In his own words, Khomotso says ���We must as a nation get to a position where the boy child is not expected to not show his vulnerability, but instead be allowed to voice out his hurts and concerns in order to provide clearer understanding of his pain and reasons for being the abuser that he is seen to be. Only through such honest conversations can we reach a point where we can say that our nation is healed and the monster that is gender based violence has been defeated.����� 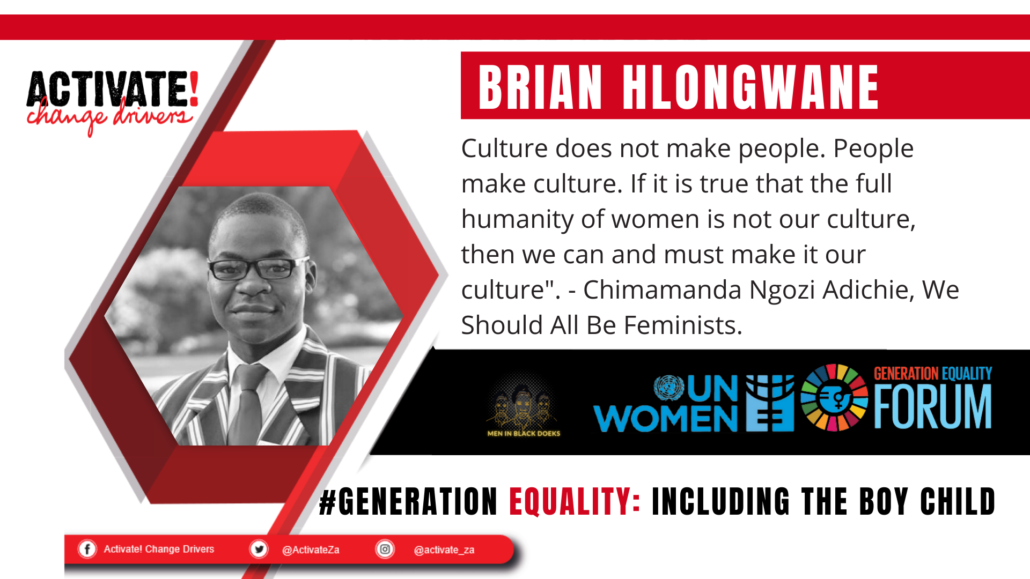 By: Tlotliso May, 2017 Activator Activator Brian Hlongwane rallies behind the gender equality call and urges the world to turn towards #IncludingTheBoyChild.�� The world as…

By: Mojalefa Mokhosi Generation equality can be described as the state of being equal in status, opportunities, and rights within a generation or all the…