Famously known as the “The Possibilitarian”, Kgadi Mmanakana has become a change driver in her community and the Limpopo Province at large.

Hailing from Ga-Matlala small community named Ga-Ramalapa on the outskirts of Polokwane, her dream of becoming a change driver in her community was something that began when she was still in high school. “When my fellow classmates didn’t understand concepts, I would gather them together and explain it to them.” Community development is something that she never saw coming. Being a community change driver was a dream she did not choose but rather it chose her, she believes the superpowers she possesses are to serve others.

When she was born her family marked her as a possibility, “I adopted the name The Possibilitarian because I was looking for a name that represents possibility and also I regard myself as the definition of possibility.” When she was asked if there’s anything that she’s doing besides developing her community she laughed and  admitted that she is a nerd and a lifelong student pursuing business and personal  development. She also owns a consulting company, “I am always learning and refining my craft on a daily basis,” she said.

Changing the status quo in my community gives meaning to my life, that we were all called to live a life of service, to do something because you want to do it and not called to do it. She added that, “What I do serves my soul as it always feels right to do it because I have no box to tick.”

One of her highlights in her community work was when she was awarded the certificate of Distinction of an associate fellow by the Royal common worth society; a United Kingdom Organisation in the year 2015. Her work has been well received as she gets love from her mentees as well as Facebook friends who attend her sessions. Nothing satisfies her more than to see people see value in the time invested in her sessions.

Her long term goals are to have formal coaching programmes were people subscribe to be part of the programme and at the end they create new beginnings for their own lives, this year she has started a new inspiration tour and a coaching programme. New Beginning circle where she coaches young men and women on a one-on-one basis focusing on what they want to achieve. The theme of the whole coaching programme is “Life is 10 percent what happens to you and 90 percent how you respond to it.” With Education, skills development and Entrepreneurship the long term goal is to have training programmes that will up-skill community members, help them to be employable and also to create jobs for others.

Though she feels she hasn’t done enough for her community, she draws strength from Kgadi, a strong and brave women who sees problems and comes up with calculative solutions.

I am from Cosmo city, and I believe the government can use the open spaces in my community to build more sporting facilities so that all sporting codes can be accommodated. The government also needs to educate young people and the rest of the community on how they can access the facilities for usage. 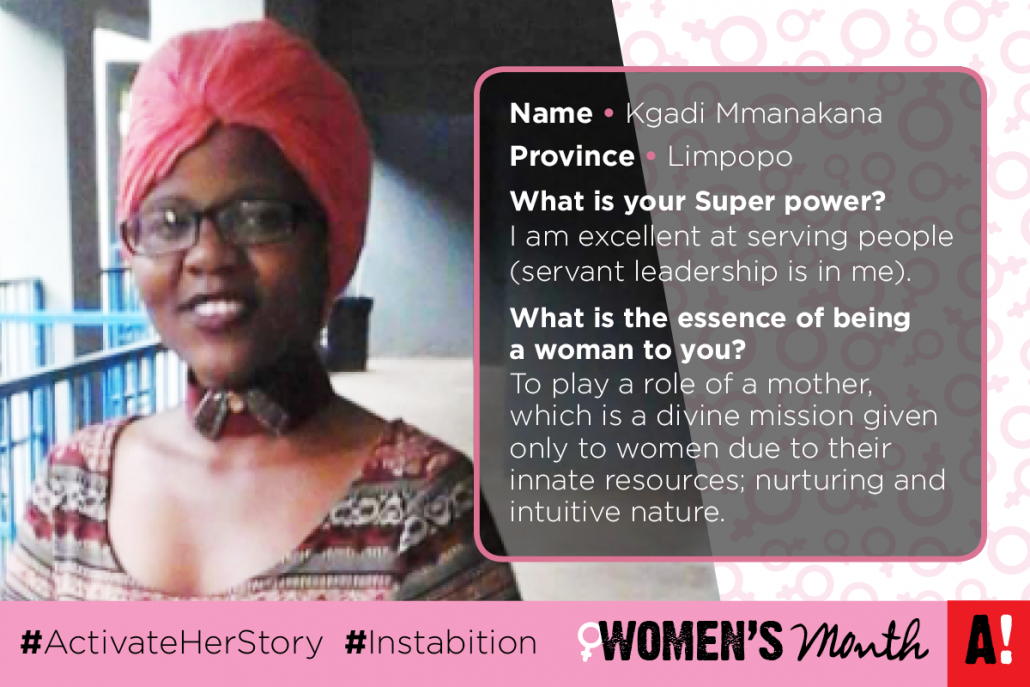