Before you become part of this South Africa’s biggest network you go through its process. It took me more than a year before I became a member of this network but I couldn’t give up until I became a member because of a love of helping the community, especially the young people who are really in need of help. When I got the call from ACTIVATE! leadership interviewing team, I thought that I was daydreaming – it was mid-day; I was at Vuselela TVET College Taung Campus.

Before I went to the training, I got an email with a bus reference – I  really don’t know what to expect; wondering the whole trip, from Vryburg to Johannesburg Park Station until I met a lady from Upington who was attending the same training. We traveled about 50 kilometers from the park station to the venue – it was farther than we expected. 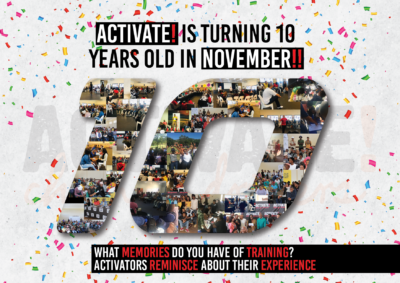 In all honesty, I was just thinking we may be kidnapped because: I did not really trust the Uber driver; the venue known as Lekoa Lodge at Villiers was away from everything and only close to the farms. I was just relieved the time I saw the ACTIVATE! Leadership Team. They really gave us first-class services.

I want to help but not with money but with ideas on how to make money – you should teach people to catch fish, not catch it for him/her because the time you are not around he/she will be facing challenges. I simply say: if you give people money to start something, he/she will relax. As such, I don’t keep the knowledge I got from ACTIVATE! for myself. I share this information with the people who are around me and they will share it with other people who are around them.

We are a family even though we were from different provinces, with some of us from the rural areas. What hurt me was that I was the only one from my area. On the second day, we touched on important topics like identity, leadership, innovation, articulation, socio-political navigation, and many others. My hope for that camp was to learn how to be articulate and innovative; to change the way I used to do things and how I used to see things. I needed to be a better leader in our community. Each and everyone shared only three things that happened to them, good or bad, with the rest of the team. We reflected on every topic we finished with: the good part was that each and every answer was correct, that thing motivated me and the rest of the team.

ACTIVATE! gave us hope and made us feel free to share anything without fear; it gave hope to the hopeless people, especially those who thought they are a failure and thought of giving up. That camp changed my mindset and made me realize the reality of myself; I would have given up on myself. I realised that the team doesn’t do it for money but they do it to see the Black become independent, free, and most importantly, to not be a job seeker but job creator so that they could help other people and change the situation that we are facing in our different communities.

By Tlotliso May Speaks ACTIVATE! is a network of young leaders in South Africa that are committed to making changes in different spheres. This means…