As 2020 draws to an end and the New Year slowly begins to show its head, many have begun to make provision for the forthcoming back to school season. Not every child, however, will be privileged enough to get a pair of new school shoes come January; a reality that is as real as it is painful.

Walk for Change is an innovative initiative that was organized by Hope for Africa Foundation, a group of young people from around the country who seek to help remedy this unfortunate situation. Activator Khanyisa Damoyi from the Eastern Cape is one of the leaders and she says “this is an initiative which at its core, aims to raise awareness about the lack of appropriate footwear for children in disadvantaged communities. This is an issue that has long existed in our society; many children today still walk to and from school with shoes in dire conditions or even worse, without any shoes at all. This tends to have a negative impact on the child’s self-confidence and academic performance, hence we began the Walk for Change project.”

One foot in front of the other

Khanyisa, along with 6 other change drivers, decided to embark on a seemingly impossible journey, literally walking 620 kilometres from Johannesburg to Durban, all for a good cause. Their gruelling journey began on the 11th and concluded on the 26th of November 2020, the aim being to raise funds to donate towards the purchase new school shoes and other supplies for children in disadvantaged communities. A long term objective of the initiative, Khanyisa says, is to collect enough books and other resources to be able to build a library in Engcobo, Eastern Cape, in order to introduce the young people there to a culture of reading.

They may have concluded their inter-provincial walk, but Damoyi says it was very demanding on many levels and the journey was definitely not a walk in the park. “We faced many challenges along the way, including the unforgiving heat of the sun, physical injuries, blistered feet, fatigue and occasional issues when it came to accommodation, but still we persisted.” Damoyi says that the trip also demonstrated the heart that their team has, as some of the team members overlooked physical challenges such as body weight and pushed themselves till the very last stop.

With the trip in the bag, Damoyi says that they hope to assist between 3000 and 4000 children, noting that they partnered with eight municipalities across the country. She says that many young people whom they met throughout their trip showed keen interest in joining them on their next walk which is going to take place next year. She is confident that they will have many more than seven people participating in the next walk and they also hope to get more corporate partners on board. They also aim to collect donations of books along their next journey as a step towards realizing their dream of building a functioning library in Engcobo in 2022.

“It always seems impossible until it is done” Khanyisa says. “…If any young person within the reach of this article would like to do a similar thing but is somewhat doubtful, I would say to them just start. There will be lessons learnt and mistakes made along the way but do not be afraid to fail. You can do it!

The compassionate teacher shared a girl in her class who walked with broken shoes to school throughout winter. That painful story propelled Adams and Osman to start on the 5th of October Walk a Child to School campaign. 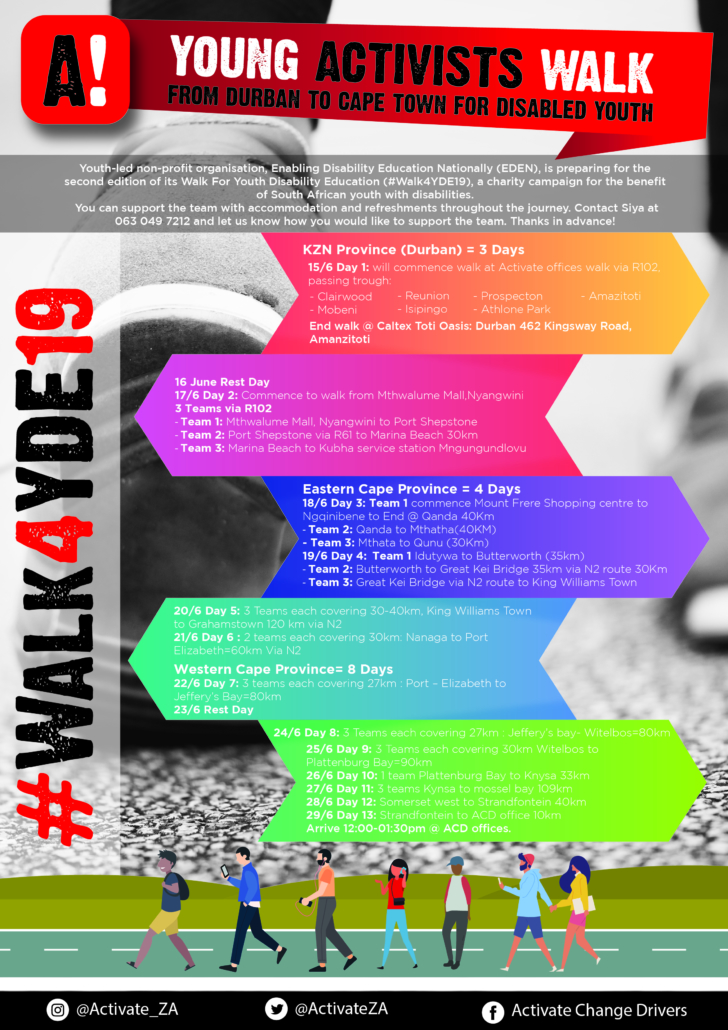