On Wednesday the 15th of September 2021, Chirwa hosted a virtual engagement on Google Meet, which was attended by 15 members of the ACTIVATE! Network and members of ACTIVATE! Leadership, the aim of the engagement being to outline and build on ACTIVATE!’s strategy for next year, 2022.

Elaborating on the objective of the session, the CEO said “It is imperative to hear thoughts about the direction we should be taking as an organization from an Activator’s point of view because the biggest and most important stakeholders that we have as an organization, are the Activators themselves. Everything we do at ACTIVATE! has to be by the network for the network, hence it is of great importance to include the network in most of the strategic decisions that we make.”

Chirwa outlined the four pillars of ACTIVATE!’s strategy for 2020, which include expansion of reach, social solidarity, deepening impact and activating change. Breaking down some of the pillars, Chirwa said that Activators should be seen and see themselves as partners of the organization. She added “We as an organization cannot do what Activators are doing on the ground, so it is imperative that we support them so they are able to build a strong solidarity within communities.”

Nazareen Ebrahim echoed the CEO’s point, saying “I like that note about becoming a partner. It is similar to an employee training himself to think more like an entrepreneur.” On the expansion of reach, Keagen Gertse said “…for some time I experienced some form of buffering in the network where opportunities seemed to be beneficial exclusively to Activators. I appreciate this outlook as we are casting our net wider and further, outside the bounds of the network where we can affect impactful development.”

Xolani Ngobozana, who is involved in the arts and culture sector, made a suggestion that a similar strategic planning session be held in the near future to look at how Activators who are in the arts can partner with ACTIVATE! and other stakeholders outside of the organization, stakeholders like the National Arts Council.

Themba Vryman also made an important point, highlighting the importance of mental health; stating: “although Activators have proven to be active agents of change, it is important to make efforts to prepare them mentally to become fit enough characters to become advocates of social solidarity.” A relevant point that Themba made, noting that we have lost Activators in the community development battle whom we had easily assumed were fit enough to weather the storm but they unfortunately succumbed to pressures that come with vigorously polishing tainted communities.

During the discussion, Sidisa Qeqe also expressed concern over difficulty to connect with other Activators, owing to the fact that she and other Activators are based in very isolated areas. This is a point that the CEO took into consideration, saying  that as a strategic move, Activators must get into a position where they are able to connect virtually as much as possible and exchange resources, given the limiting nature of today’s social circumstances.

Speaking of virtual spaces, our CEO mentioned that the strategy which was outlined at this engagement was prepared before the Covid 19 pandemic showed face, which now presents an opportunity to modify it according to the current state of affairs and it necessitates now more than ever, the input of the ACTIVATE! Network. More than anything, the session proved to be a success, be it that the strategy is still being constructed further post the engagement, and it shows one thing, that the network is indeed for itself by itself. Now we look ahead to 2022!! A new year, with new possibilities! 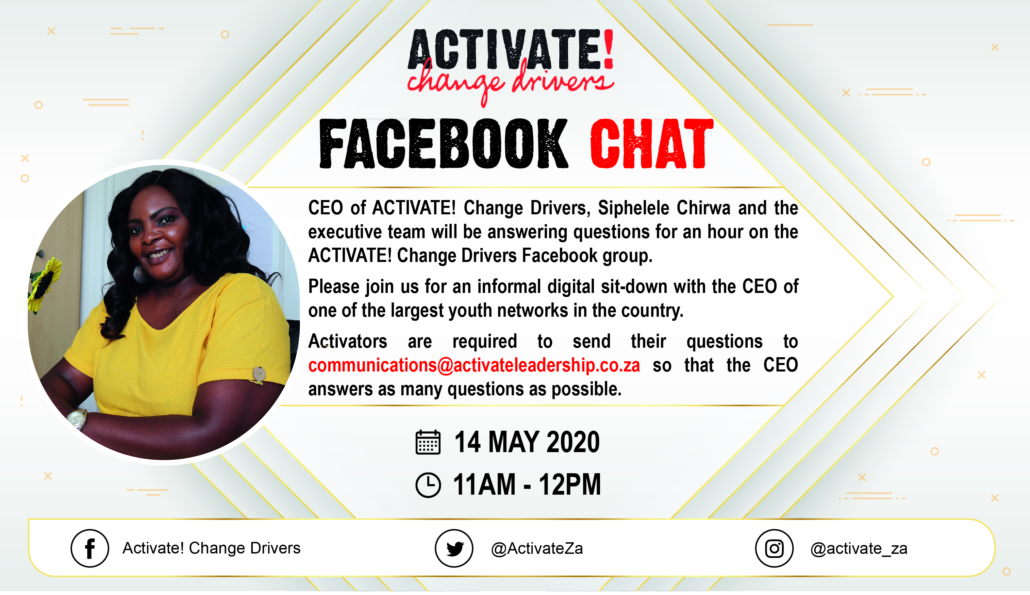 By Paul Mabote “I am (concerned) about our mental state as young people. What are you going through? What is it that we can learn…

Meet Siyavuya Mlungu who joined the ACTIVATE! Network this year and is passionate about business and leadership.