My mind is constantly on the move. Boarding planes, buses and ships across the world. There’s a revolution of the voices that bring change. Cynthia Untamed has finally crossed the border over to South Africa. It’s amazing to bring these stories to life. Gift Methule is from Mpumalanga Province in South Africa and is currently here (Kenya) on an exchange program. He considers himself as an activist and youth organiser. One of the organisations that he works with in South Africa is called ACTIVATE! Change Drivers. He was trained on many skills such as public innovation and leadership. He is the station coordinator there. His office deals with collecting data from information centres, verify that they are credible and then distribute it to the youth. 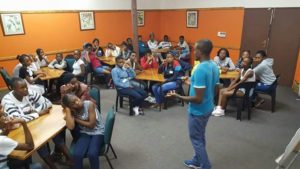 They are keen on organising dialogues between the youth and their leaders. Gift is keen on encouraging young people in South Africa to engage with the government. They do this by teaching them about government procedures, policies and how to approach the government using appropriate procedures.

‘I also work with an organisation called Mamkhulu.org that empowers young children by teaching them about the dangers of drug abuse and dangerous criminal activities. Teen mothers are also encouraged to keep their children. We give them a conducive environment to accept their children and empower themselves. I am personally in charge of agricultural empowerment,’ he elaborates.

His focus also lies in helping the youth to commercialise their talents because he appreciates that not all children are academically gifted. The main challenge facing South African youth is unemployment, a striking similarity to many nations. He therefore urges young people not to rely on the government to get job opportunities but rather identify a niche in the markets and make money from that. 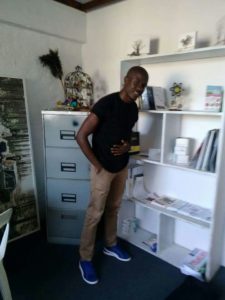 ‘I am impressed by the kind of innovations being done by Kenyan youth who have taken technology very seriously. I am encouraged by the apps being created in this country to solve common problems in the community like M-FARM, an app that empowers farmers,’ he reflects. Gift describes Kenya as a beautiful country and hopes to explore more by going for cultural events and visiting areas such as Kibera where he hopes to collect positive stories of the day to day lives of the people living there.

The importance of engaging people cannot be underestimated. He stresses that if you talk about the issues affecting youth, then they must be present because the people with the problem are those who have the solutions. Education should accommodate different perspectives. It shouldn’t be all about getting a degree and commercialising the sector. Life is about how you impact people in terms of uplifting your community. Any form of education therefore, can be the key to success.

There is a wide misconception that black people don’t read. This is totally false according to Gift because he believes that reading is a choice, not a race issue. He is concerned about the fact that most people are still afraid about talking about the things that matter such as tribe. He appreciates the fact that South Africans have embraced each other regardless of tribe although he attributes this to their history with apartheid. 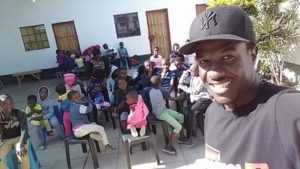 His hope for the future is to see himself impacting more people in his community. He wants to keep growing as a community builder. Further, he wants to see the youth believing in Africa as a continent. He would like to see them building their own narrative and creating change.

‘The future belongs to everyone and it is up to everyone to make their future brighter,’ he asserts.

Following his name, Gift is just that to his community of Kabokweni as he makes it his duty to fight the war of substance substance abuse through literacy.