Sometimes taking action can be something as simple as speaking out, which is exactly what a group of activators did to start addressing the issue of the corruption that runs rampant in our beloved country. Taking place ahead of the country’s anticipated budget speech, a panel discussion was held to hear what members of the network had to say about corruption, so those views and opinions representative of the network as a whole, could then be shared to the media and general public.

If the coronavirus pandemic has taught us anything it’s that small, united, actions can lead to large achievements, and the mammoth task of tackling corruption in the country is one that’s going to need all hands on deck. Being a systemic issue that’s been running largely unchallenged, and unsolved, for years now, the Activate network has decided that enough is enough, as it launches a campaign to face this problem – that’s affected us all in one way or another – head on. As one of the initiatives of this campaign, the network invited a handful of Activators to a panel discussion, where we were given a chance to have our perspectives, and opinions, voiced out. The discussion thoroughly covered a range of topics from defining corruption to conceptualizing the reasons, and motivations, behind it as participants took turns answering various questions that were raised. As one of those who participated in the panel discussion myself, I gained and learned quite a lot from the gathering, such as the fact that many of us may be left feeling powerless to the scourge of corruption prevalent in the country, and the abuse of state owned resources, much of the time as we watch the leaders we entrusted continue to plunder shamelessly, but it is important to remember that the power comes from the people of the nation, and it is when we band together, and take a stand in any way or form that we start to drive change. The voice of one person alone may not be enough to get a point across at times, but the chants of a large group speaking in unison is hard to ignore. It is also important to remember that many solutions exist to solve a problem, and employing more than one can serve to increase the likelihood of success.

Banking on the power of the people, the Activate network is only getting started with the campaign, where we can expect to see more call-outs and initiatives to strike a blow against the menacing monster that is corruption, in the future, but as it’s been said time and time again the network is not an autonomous machine that acts on our behalf, but rather the collective efforts of it’s over four thousand members across the nation working to achieve shared goals, and now a new shared goal stands before us: putting an end to the crippling corruption once and for all. It’s clear to see that the problem will not go away on its own, and it will continue to be a huge hindrance to the country’s progress, and development, as long as it exists so we must decide whether we’re going to do something about it, or sit back and let it continue to deteriorate our nation. We’ve waited long enough for commissions of inquiry to conclude, and state capture investigations to yield results, only to be given the run around over, and over again, as scapegoats take the fall every time, but masterminds, and perpetrators, continue to operate behind the scenes, unbothered, and undisturbed.

In the words of Edmund Burke, “The only thing necessary for the triumph of evil is for good men to do nothing”. No action, or attempt, is too small if it contributes to a united effort, so we can make a difference if we try, and the #YouthAgainstCorruption campaign is our chance to address a massive issue that’s been plaguing this country, and in who’s absence we may see the prosperity we, and many generations before us, have dreamed of seeing. 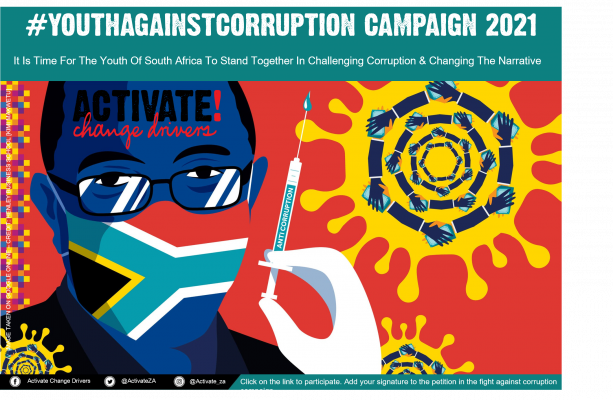