The 2016 and 2017 academic year will go down in history as years which marked the unity of young people, specifically students beyond the political spectrum and colour. It saw a generation notoriously labelled as arm-chair critics and social media revolutionaries assuming their rightful role as constructors of the future by taking it to the streets to demand free education. The commission was set up by President Jacob Zuma to discuss modalities and the feasibility of free education. Fast-forward to 2017 on the 13 November. The President issued the fees commission report which got a bittersweet reaction from the student population and activists in general. Let me breakdown some of interesting issues:

This is one annual headache for many prospective students; indeed the Commission removed the burden from the shoulders of the students and parents. Students fall prey to Mashonisas (cash loans), Sugar daddies and are subjected to slavery in big business in an attempt to fundraise registration fees.

This recommendation is worth celebrating particularly considering the country’s quest to make TVET colleges centres of choices. South Africa is in need of technical skills provided by TVETs in order to narrow the list of scarce skills we have in the country in the form of electricians,boilermakers, plumbers etc. The main worry is if we do this to TVETs only, it will be tantamount to the racist and divisive tricameral parliament where TVET will be for the poor(mainly black)s, the rich(mainly white) and few middle classes will attend the universities as they will afford them. What is done on the left must be done on the right, so the Commission must not divide our people. Same avenues must be explored in varsities.

The willing donor mechanism still exists in institutions of higher learning and through other NGOs but it doesn’t bring desired outcomes. For corporates and the wealthy there should be binding legislation in a form of corporate/wealth tax to fund free education. Education for all requires a radical call which binds its corporate citizens to play a meaningful role.

Banks are going to facilitate loans for education and government to act as collateral, this is a decision to open doors for a world of debts for our students and it is a strategy to pump profits and enrich these banks as they will be at liberty to charge exorbitant interests, here Judge Heher and his team confirms that private sector submissions in the Commission resonated well in their ears. This recommendation is a big victory for the banks and a spit on the working class and the poor. Their (private sector) inputs to the Commission was to address the “’how do we eat” question at the expense of our miseries.

To conclude, genuine demands needing immediate attention are always subjected to bureaucratic processes which delays (with cost) service delivery to our people. The costs of these commissions are too high. South Africans must make a determination on whether they let free education be a political power or a social power but my advice to young people is that they must relentlessly fight for what is right. We are the future and this future is sooner than we expect.

As the ACTIVATE! network is widely known for its constituency which has a galaxy of ideas on the future of this country, I engaged them and these were some of their views:

“To be honest, I have always seen that free education can’t happen anytime time soon. Not in the state our country is in. Anything that has development and empowerment, our government only supports by words not action. And sadly whatever that was presented yesterday, has shown where our government stands in terms of education, they don’t care.” Activator Sabatha Segoba, Free State

“I haven’t read it or got comprehensive reporting on it but from the little I’ve heard I don’t support the idea of accessing loans through banks especially if there won’t be conditions put to banks on how much interest they should charge and all other terms of repayment. Though banks could provide more efficiency in the whole system incl repayments but without conditions put to them I won’t support this idea. I don’t know why this whole fees issue is being complicated so much. Reasonable people appreciate the fact that SA can’t afford free education for all. A threshold (R350000 or whatever) must be put and then the rest who earn above that should take NSFAS loans which should be interest FREE.” Activator Thembinkosi Sithole, KZN

“ I haven’t read the whole of it but what I have read so far honestly its not adequate also the government wants to hand over the economy to white capital monopolies all over again.” Activator Rinae Sikhwari, Limpopo.

“It brings suspicion on why it was delayed and It nearly cost students their academic year. I think that we should accept it. As these are baby steps to reach the destination we want. To say government is not doing enough is unfair. Lets all work together to ensure that we peacefully achieve free education. As citizens it is not assisting if we are always in fighting mode whenever solutions are given. Our fight mode has proven to be costly as we burn libraries and schools which take us steps back to our dream. So my view is that lets accept it while working towards on solving the parts which are problematic.” Activator Philani Gumede, KZN. 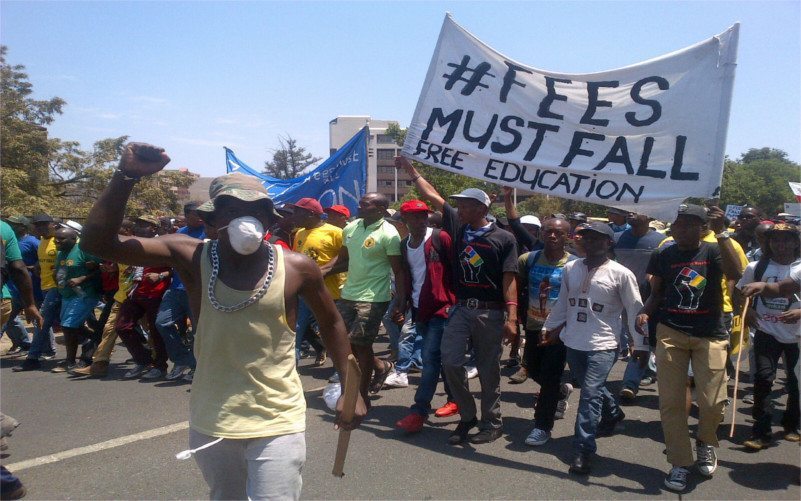 Throughout the Fees Must Fall demonstrations, we hardly heard from students who have secured funding or have the means to pay for their studies. The voices of those not affected by the staggering fee increases appears to be silent. Ramadimetja Makgeru caught up with two students who have funding to hear their thoughts on the Fees Must Fall movement.