Why does it cost people with uteri their lives to have a choice? Why is the abortion conversation so mystified and highly contested when people die every year, when the World Health Organisation (WHO) states that globally every 8 minutes a woman dies from causes related to unsafe abortion? That makes it a matter of urgency, but for many reasons that further perpetuate abortion stigma, this remains a neglected issue.

Our beloved country is no different, and may as well be feeding greatly to these shocking global statistics. Abortion has always been legal in South Africa under the Abortion sterilisation Act, but restricted to special cases. It was then liberalised in 1996 allowing for any woman of any age to terminate an unwanted pregnancy, and was further liberalised in the early 2000s to enable trained nurses alongside midwives to perform first trimester abortions (medical abortions in the first three months of the pregnancy), and provisions to report illegal providers. There are abortion guidelines which are currently being updated for this. The guidelines further breakdown aspects such as who can perform which abortions and referral protocol for healthcare workers.

This year, South Africa marked 20 years since the liberal abortion act was passed. The Choice on Termination of Pregnancy Act (CTOPA) states that any woman of any age can have an abortion in South Africa, not needing anyone’s consent but their own. It is acknowledged as one of the most progressive abortion laws globally, but as one would guess, there is poor implementation. The consequence to this is an estimated 10% of maternal deaths being from unsafe abortions in South Africa. Only 40% or less of the designated facilities that are supposed to offer this service are actually operational, which could also be the reason that an approximate 50% of abortions that take place are through illegal providers. As if this alone is not bad enough, we have not discussed the shaming, policing and stigma women[1] face during this process, which may alone be the reason ‘women’ would opt for illegal providers.

However through all this, let us recognise the growing number of Civil Society Organisations (CSOs) that are resisting in this space. Young femmes are doing incredible work in engaging on this issue.

Abortion interventions in SA- September 28 and beyond

September 28 marked the Global Day of Action for Access to Safe and Legal Abortion, which is an internationally recognised day originating in Latin America and the Caribbean, where women’s groups have been mobilising around September 28 for the last two decades to demand their governments to decriminalise abortion, to provide access to safe and affordable abortion services and to end stigma and discrimination towards women who choose to have an abortion. This day then became internationally recognised, and more CSOs and some governments had since adopted it as a day for amplifying campaigns for access to safe abortion.  The Sexual and Reproductive Justice Coalition (SRJC), FEMRSA, and the End Abortion Stigma Initiative (EASI) are amongst the South African CSOs who took part actively on this day.

Kanyisa Booi works with FEMRSA, an organisation that seeks to create access to safe abortion through digital communication channels. They are counted as one of the organisations mapping abortion services in the country and where possible, being a referral system for women seeking abortions. FEMRSA organised a wonderful initiative of removing as many unsafe abortion stickers as possible around the city of Johannesburg. This initiative was led and attended by young people in the city. “We know that abortion is legal in South Africa. We also know that a lot of women are vulnerable to unsafe abortion providers. When FEM made the call to remove illegal abortion provider posters it was a way for us to conscientize (editor can use create awareness) young South Africans on the reality of unsafe abortions in the country, but also to make them realise how they can play a part in driving change in this context”, said Kanyisa.

The Sexual and Reproductive Justice Coalition (SRJCSA) held a series of panel discussions at Rhodes University, SWEAT (a sex worker advocacy group) and the Soul City Institute and at the Human Rights Council in Geneva. These panel discussions were addressing intersecting issues of access to safe abortion such as sex work, referral systems and protocols and understanding abortion in the context of reproductive rights and justice. “Medicine is a science, and we must respect that science. Abortion is abortion, a medical procedure. We cannot be calling it Termination of Pregnancy (TOP) as a way to reduce stigma- that further perpetuates the stigma. We must call it what it is”, said Dr. Tlaleng Mofokeng (SRJC Vice Chairperson) when she was speaking at the Human Rights Council, calling out people who were suggesting that abortion rather be referred to just as Termination of Pregnancy as a way to get people to listen.

These amazing conversations and interventions did not end in September 28. On October 5th, the End Abortion Stigma Initiative organised an exhibition of abortion stories, Body of work: Abortion Conversations. The exhibition was full of young artist displaying abortion narratives through art pieces. Kea, a young artist from Klerksdorp, was exhibiting a piece called “I dare you to call home”, and the concept behind that was an experience she was sharing on how lonely going through an abortion can be, that one can’t even call home. “ I have so many close friends and family, but going through that I could not tell anyone because of the stigma attached to it”, she said.

[1] The Choice on termination of pregnancy act defines “woman” as any female person of any age. 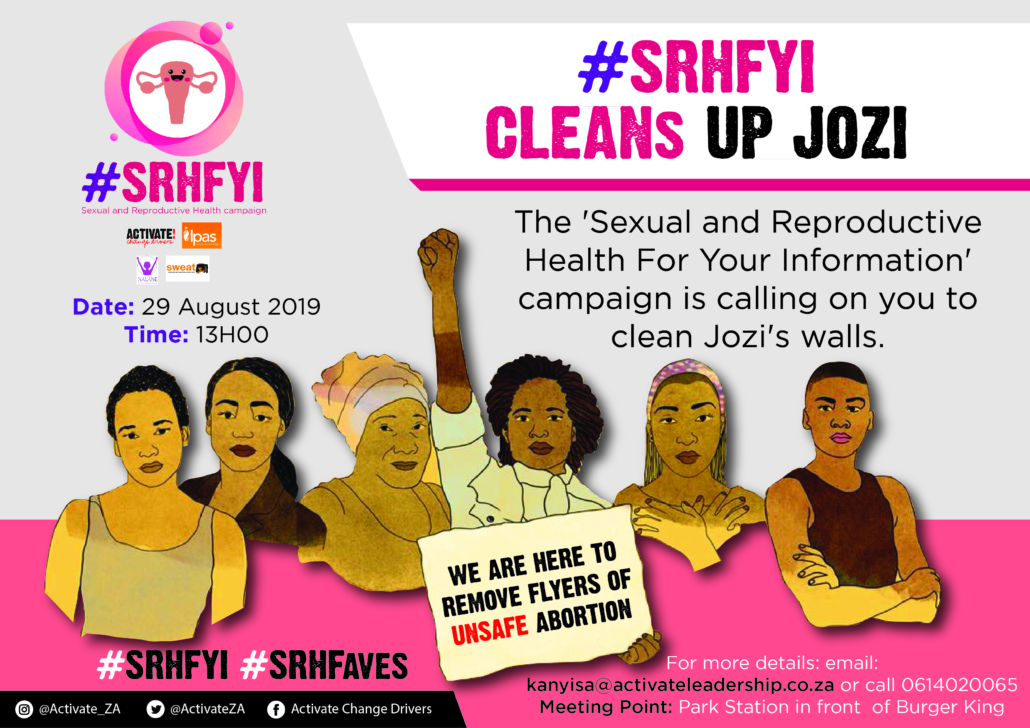 Twenty two years ago, South Africa attained democracy, which came with a bill of rights that was established to ensure that every citizen is treated fairly and has freedom of choice. However, with human rights like the choice to terminate ones pregnancy still heavily stigmatised, even after nearly 20 years since it was legalised, are we entirely free?