HOW THE ARTS, ACTIVISM AND THE CONSTITUTION CAN HELP US FIND OUR POWER

“Burning things in anger is sometimes understandable but it is not necessarily good for social change because when the anger subsides it leaves us poorer. We need to organise our anger differently and think of innovative ways of change which will inspire and capture people’s imaginations” Mark Heywood

ACTIVATE! Change Drivers in its quest to empower young change makers across South Africa partnered with seven stake holders (KFW, Department of Health, Section 27, Youth Against Aids, Drama for Life, YouthLab and Empowervate) to present the A! Youth Activism Workshop at the eKhaya Theatre at the Wits University Art Museum in Johannesburg from the 14th May 2018 until 16th May 2018. The objectives of the workshop were to reemphasise and provide an overview of the ‘Big 5’ focus areas adopted by the youth network which are A!Health, A!Literacy, A!Youth Economic Participation, A!Interconnectedness & Inclusivity and Active Citizenship. These sectors were chosen by the Activate! network through a series of engagements held across the country in 2017. Futhermore the workshop wanted to provide its participants with a global context of youth activism and the importance of the arts as a form of activism.

American art critic and philosopher Arthur Danto had a profound interest in the origins of the arts; he concluded that human beings are what he termed ‘ends representers’. This means that human beings unlike animals engage with the world and afterwards represent the world back to itself. Human beings do this because they are intuitive makers who create narratives out of their representation of the world; this is the basis on which all forms of art originate. Whether through drama, song, poetry or dance throughout human history art has been the fundamental engine for human evolution. This is one of the reasons why Activate! decided to host the youth activism workshop at the Wits Art Museum’s eKhaya theatre and invite over forty activators from all the nine provinces driving change in different sectors.

The workshop was kick started by Lwazi Mdlopane of KfW who explored the various strategies for effective activism and advocacy, the highly interactive (sometimes heated) discussion concluded in agreement that effective activism is and should be built on four important pillars namely; learn, listen, leverage and lead. This was promptly followed Hasina Subedar of the department of health who primarily led a discussion around two focus area which were the She Conquers campaign and the Bewise program. The She Conquers campaign was launched by President Cyril Ramaphosa while he was in his capacity as the chairperson of the Aids council; this was in response to alarming research figures which revealed that the 15-24 age groups were profoundly affected by the Aids pandemic. These shocking figures therefore called for a societal led strategy which aimed to fight the rise of new infections while at the same time educating and mobilising the population. This is where the German NGO Youth Against Aids headed by Daniel Nagel, Roman Malessa came in to present its work and its drive to get over 300 young people from BRICS nations to attend the upcoming Aids conference in Amsterdam.

Policy think tanks YouthLab represented by Pearl Pillay and Tessa Dooms engaged activators on the importance of policy in activism, according to Tessa Dooms “policy is central to activism and it starts with a person having an idea that something has to change”.  It was however Section 27’s Mark Heywood who laid bare the dire conditions currently besieging our country and how young people through their activism could change the directions of our country. He started his address by saying “I am glad Activate! has nearly three thousand activators, I wish it could be three hundred thousand so that it becomes a name associated with social justice more strongly”.  He argued that young people are not apathetic but have been disempowered and therefore needed to organise their anger in order to find their power; “it is not enough to merely say Mandela was a sell-out, Ramaphosa is a sell-out, parliament is a sell-out so I want nothing to do them, that is where power currently resides and young people therefore have to find a way (through activism) to talk to that power and to change how it works in order to take some of it for themselves”. The constitution according to Mark Heywood is the source of our power, it can only be powerful if we use it; it is not enough to just quote what the constitution says but young people need to mobilise and organise around what the constitution says. This is where the Activate! hackathons become an instrumental tool of mobilisation, because they zone in on specific areas in order to broaden understanding.

Throughout the entire workshop Drama for life, Classic Designs and Forsh Pilato gave powerful performances using dance, poetry and music as methods to communicate social challenges. This they argue is effective because a majority of workshops, conferences and seminars still concentrate on one part of the body which is the head, yet human beings think kinaesthetically. This deliberate disembodiment of human beings causes serious disconnections when certain messages have to be communicated. The ‘toyi’toyi’ dance in South Africa has become a national symbolic dance for struggle, it is a representation of unhappiness, even those who cannot comprehend complex issues know once they see the dance they understand that something is amiss. Therefore theatre is a powerful tool for social change, which change drivers should heavily invest in because if we are realists we must understand that we cannot microwave social change. Social change is in essence about engaging with power; however young people need to locate their power in order for them to effect change. 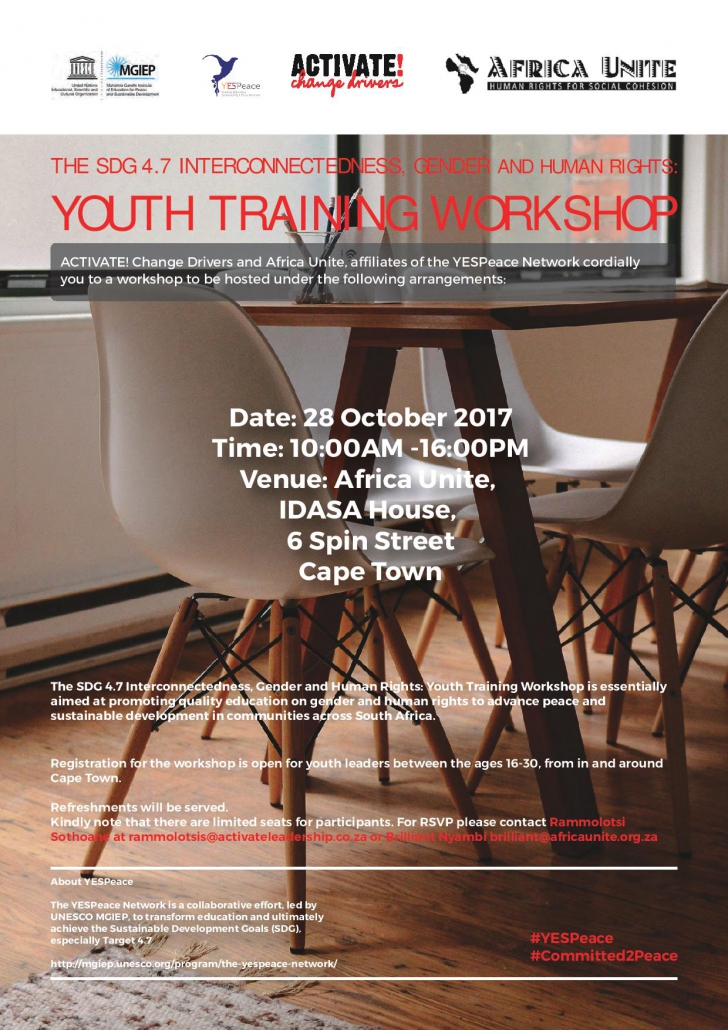 FOR IMMEDIATE RELEASE 27 October 2017 RE: ACTIVATE! Promoting education and peace beyond 16 Days of Activism #Committed2Peace #YESPeace  On the 28th October 2017, ACTIVATE!…

Activators attended the AIDS Conference at the ICC in KZN to make their voices heard and to contribute towards active citizenship.