We live in a very interesting political climate. Could it be that miraculously we now have a government that takes youth challenges of education, unemployment, entrepreneurship, health amongst others, seriously or is it just liberal lip service? The 2019 budget speech by the finance minister Tito Mboweni has brought radical allocations of funds to youth related challenges and bold tax decisions. Could the final budget speech for the fifth government administration be what the youth have been waiting for or is it just an election campaign for the ruling party that is supported by the opposition.

The minister highlighted the six fundamental prescripts on which the budget was built. They provide a framework on how the President and his executive plan to;

Striking a balance amongst the above was not easy for the minister as the country is still dealing with extremely high levels of corruption and just came out of a technical recession in 2018, making it the country more difficult to attract investment. With countless commissions of inquiry into corruption running and more measures put in place like the re-establishment of the rogue unit in SARS to ensure that all the leakages in tax collection are closed, the minister remarked that “we must prune and pluck away the rot caused by pests”.

In a move towards free education, the minister again allocated more resources to education. A total of R386.4 billion which constitutes close to 25% of the tax payers money, will be for both basic and higher education. Of the above listed amount, R111.2 billion rand will be going directly towards the financing of free higher education for approximately three million students in the universities and TVET colleges. A move that symbolises a milestone for the fees must fall generation. Thirty billion rand was allocated directly for building new school. With a well build school costing an average of R55 million, the budget should be able to build 545 school in the current financial year. The minister has also allocated R2.8 billion to eradicate pit latrines in 2400 schools meaning after this financial year there will be no school that has such facilities.

“I am pleased with the R250.4 Billion set aside for basic education, however financial resources we have deployed previously have not yielded the desired outcomes” remarked Mzwandile Msimang, 2013 Activator from Ekhuruleni, “as such we have a huge dropout rate in basic education. R246 billion of that went to basic education in 2018 and this only left about 2% to early childhood development in the previous financial year. In this financial year what the President highlighted in his SONA about ECD being fully incorporated into basic education should take priority as this will bring some relief to the sad salary disparities of practitioners although the minister of finance did not speak to this directly in the budget speech.”

Job creation remains a priority in the country, and minister Mboweni highlighted that “there was an increase in the income eligibility thresholds for the ‘highly successful’ employment tax incentive scheme. Jobs for 1.1 million young people are supported by this programme.” This proclamation is yet to be substantiated by evidence. However with the private sector investment pledges worth over R300 billion raised by the President in his investment drive there is a breath of hope in poverty alleviation and Job creation.

Government has allocated 19.8 billion rand for industrial business incentives, that will go into supporting 35 00 jobs that are currently existing and creating a further 25 000 new jobs. The jobs fund which has already disbursed R4.6 billion in grant funding in support of approximately 200 000 jobs and over the next three year an additional R1.1 billion will be allocated to this according to the minister. Over and above the direct allocation to jobs, the minister highlighted the impact of extremely high data costs and the release of the new spectrum in the next month’s being a clear direction to ensure that data cost really fall. In every fast growing economy small businesses are the biggest job creators and in response to this the government has allocated R481.6 million to the Small business development agency for funding and incubation of small businesses.

The health sector has been plagued with challenges of staff shortages although we are in a country that finds itself with a large number of unemployed doctors and nurses. The minister has allocated R2.8 billion to ensuring that there are more doctors and nurses employed in the hospitals and clinics across the country. R1 billion has been allocated for medical internships a further R1 billion to raise the basic salary of community health workers to R3500 per month. The above set asides are for part of the R717 billion spent on health services. The dilapidating hospital infrastructure will find much needed attention, or will it? The government year in and out spends more on health however we are seeing constant decay in services.

The zero rating of sanitary products was met with jubilation by members of the Activate network like Nolwazi Ntshingila (2013) and Nomfundo Mkhaba (2017) from KZN. This is one milestone towards ensuring that the products are freely accessible in order to ensure that the girl child never misses a day of school because of inaccessibility to such.

With the leakages in the resources caused by corruption and high levels of looting in government, and not ignoring the interventions to curb this, we will have to take a “let’s wait and see approach to evaluate whether this was just an election campaign or a true panacea towards ensuring that challenges of inequality and poverty alleviation are address.

“I welcome the budget speech however until we start seeing big guns getting arrested for corruption, all the budget allocation will be in vain.” Mzwandile Msimang 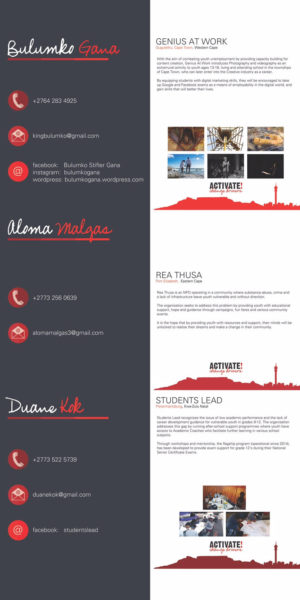 By Koketso Marishane The more things change, the more they remain the same: What a time to be alive!   Indeed, our country South Africa…