It’s been 11 months of commitment from the CDCC (Community Development Certificate Course) 2018 students, finally it’s been wrapped up. When the course began in July 2018 shortly after a process of recruiting the most suitable candidates, it was a moment of victory for the selected students having to embark on a journey, of course, that will help them formalise their community development initiatives, as well as getting an accredited higher certificate.

Considering the fact that most South African youth from disadvantaged backgrounds still find it difficult to acquire a formal higher qualification, this has been a great achievement for most CDCC students. The ACTIVATE! Community Development Certificate Course is accredited by the South African National Qualifications Authority and on successful completion of the course and if you are deemed competent, the students receive an NQF level 5 certificate which is recognised nationally. For those that did not complete all modules or are deemed not competent, they receive units standard credits per competent unit.

In July 2018 when module 1 kicked off, A! CDCC students shared their expectations from the course where many had mutual expectations of formalising their community development work as well as obtaining a formal qualification in community development. For the majority of CDCC Activators, this course has been their first formal higher education qualification. “It is such a great privilege to receive an NQF level 5 certificate at such a small fee,” says one 2018 CDCC Activator.

This qualification will now serve as a point of reference for CDCC students when applying for jobs in community development and also when they require funding or assistance from other institutions for their initiatives, it is much easier to fund and assist someone with a qualification in a related field because they are knowledgeable in that sector.

Nthabeleng Jabane shared her experience through the journey of CDCC which began by a mere Facebook post about CDCC, she further followed the page and ended up applying for the course. “Finally my community work made sense with the course, it was the missing piece of the puzzle,” she said. Soon after receiving feedback that she was accepted to take part in the course ,she eagerly waited for the first training which took place in the North West where all CDCC Activators from across the country gathered for module 1.

Activator Nthabeleng shared the same sentiment as most CDCC Activators about the training – it was packed with insightful information that needed focus and commitment. For her, the first home task and assignment was an immediate tool that took her out of her comfort zone. “My introvert self needed to communicate and engage with people who I thought was out of reach. I also made local government officials feel intimidated by the  Information I requested from them,” she added.

The CDCC study material made the students connect deeply with the community at large because most of the summative assessments required the students to be as practical as possible, the evidence required for the assessments gave us no option but to knock on doors that we never imagined entering. The tasks required us to engage at all levels ,it worked as tools to  boost self-esteem of the students because one had to be more active and communicate with the society at all levels from the marginalised residents, to the ordinary residents as well as community leaders.

The CDCC experience has not only been a journey to acquire a formal higher qualification but it also contributed towards assisting  CDCC Activators to reveal their hidden potential, to see themselves from within, to grow and to also look at the society with a more informed perspective.

As the course has finally ended for 2018 CDCC students the ball is now in their court. Nthabeleng Jabane also shared that she will use this qualification to further her studies. “ I enjoyed every pain and happiness it brought. It was all worth it,” she said. The ACTIVATE! CDCC team has played a great part in equipping 2018 students, it’s now the students turn to turn the world around with their knowledge. Knowledege is the key to infinite wealth ,only if it is utilised correctly.

The thrilled programme director and facilitator, Landy Wright, explained the logic behind the course. “We wanted to create a tertiary formal education opportunity for young people / social change drivers who are already doing community development, she said. 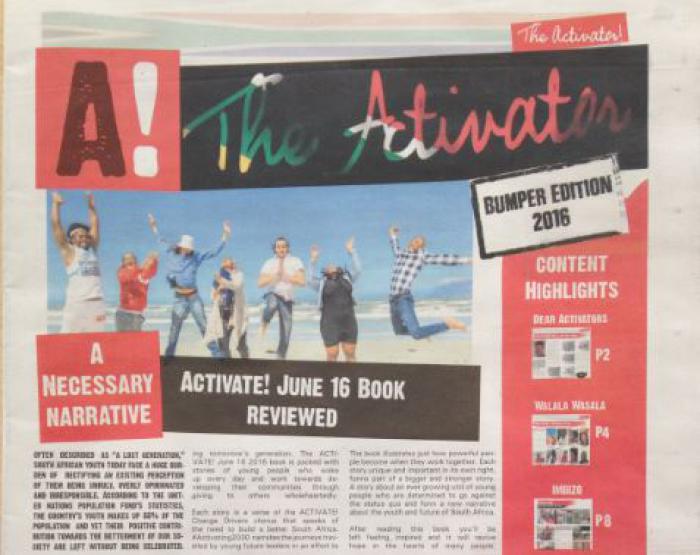 The official newspaper of ACTIVATE, The Activator is out!! In this bumper edition, catch up on Activator stories; events; Imbizo’s; the You Count Survey; what happened when ACTIVATE was represented at the UNESCO Conference and a new Innovation Challenge for 2016. Filled with photo’s and successes of the Network, this edition promises to be a good read!