Although the world is currently battling with the Corona Virus (Covid-19) outbreak, it is hard not to notice another technological wave – 5G, simultaneously shaking almost all parts of the world. South Africa is one of the countries currently pushing for the immediate rollout of this 5G technology. With conflicting news circulating around the need, safety and feasibility of 5G, the Youth Economic Participation (YEP) Sector made it their responsibility to create a platform for Activators and experts to engage on this phenomenon.

On Thursday, Activators convened a webinar on everything concerning the new wave of 5G. The webinar was facilitated by Nathacia Olivier (YEP Sector Coordinator) and Bongekile Filana (4IR Youth Champion & Programmes Officer).  Covering the engagement, as it unfolds, on other social media platforms were Victoria Tau and Mish Malokeng.

The engagement kicked off with a question directed to Mr. Dick Sono. The question was; What is 5G Radio Spectrum? In response, Mr. Sono stated that ‘’in South Africa the technology spectrum is neutral, it means the technology approach to spectrum ensures efficient utilisation of a spectrum as a resource.’’ He went on to state that ‘’ according to jurisdictions’ allocation bands ranging from 6 – 100 GHz, in particular the 26 GHz, is classified as a spectrum for 5G.’’

This was followed by a question seeking clarity on the difference between 4G and 5G, to which Mr Sono responded ‘’4G is the first generation mobile system which utilises all IP by default on its core network, 5G is the next generation of the mobile system which is viewed to increase data rates of 4G by more than ten times. It (5G) also comes with a new radio interface and new spectrum utilisation.’’

The third question was on when the government is planning to roll out 5G. In response, Mr. Sono clearly communicated that the rollout is ‘’ dependent on the investment strategies pursued by different operators, some may prioritise 5G and some may delay.’’

The last question directed to Mr Sono was on whether or not evidence exists on the harmful effects of Electro-Magnetic Radiation to humans. On this Mr Sono communicated that ‘’In order to understand this, one has to understand what electromagnetic radiation is…. despite the conflicting messages and statistics that exist, there are 5G watchdogs who have confirmed its safety.’’ He further went on to communicate that ‘’EMF waves can be categorized into two. The first being the Non-Ionizing Radiation (NIR), and the other being the Ionizing Radiation. 5G falls under the NIR category, which emits low energy. Different studies conducted confirmed that the NIR is not dangerous, it can only be dangerous in cases of overexposure – this is if guidelines are not being followed.’’

The guidelines were developed in 1998, by a scientific body called the International Commission on Non-Ionizing Radiation Protection (ICNIRP), based in Germany.

Dr Albert Lysko joined the engagement sharing an informative short presentation communicating some of the reasons why South Africa needs 5G. During his presentation he highlighted that ‘’there is hunger momentum behind it (5G) and it is an excellent technology in many aspects.’’ One of the shared aspects was that the implementation of 5G will keep South Africa on par with the rest of the world.

The platform was then handed over to Prof Antoine Bagula who shared findings from his research, conducted about 5 years ago, on 5G coverage for rural and isolated areas, using the internet of things (IoT) in motion – the internet of drones. The research focused on the economic feasibility of 5G in urban and rural areas, and also on the engineering efficiency on the deployment of 5G in the rural and isolated areas.

Following his findings, he predicted that 5G may only be deployed in the urban areas, therefore further marginalising the rural communities. According to Prof Bagula this is because ‘’ most telecommunication companies do not invest where there is no return.’’

Marnus Van Wyk joined in the platform and began by elaborating on the ICNIRP, highlighting the fact that these guidelines are currently being used in more than 100 countries around the world and that a new version of these guidelines was introduced less than a month ago. Mr Van Wyk further confirmed that ‘’in South Africa, we currently have one 5G operator (Rain) using the 3.5 GHz bands, which is known to be safe as long as you comply with the relevant guidelines covered by ICNIRP.’’

Mr Sono returned to the platform to communicate on regulations being in place for the rollout of 5 5G in South Africa. In response to this, Mr Sono communicated that ‘’for any rollout or licensing to take place several regulation matters need to be addressed.’’ He further went on to say ‘’from a South African point of view we have the National Radiation Frequency Plan, which is developed and updated every four years.’’

Following these insightful contributions by the keynote speakers, the floor was open to Activators for the Q&A session. The questions raised to the speakers, ranged from health concerns to opportunities that 5G may bring to small businesses owned by the South African youth. On opportunities for small businesses, Mr Sono strongly advised that ‘’to benefit you need to be very  innovative, separate yourself from the pack and be able to come up with things that can be seen as a niche…. like coding in AI (Artificial Intelligence) and cloud computing.’’

When asked for his honest personal view on whether or not South Africa is ready for the rollout of 5G, he clearly communicated that ‘’we are ready, we just need to make sure the platforms are accessible to everybody to ensure that even South African junior tech companies do benefit (from the rollout).’’

The engagement was expected to be also graced by the South African Minister of Communications, Stella Ndabeni-Abrahams , however due to national duties she ended up not being able to be part of the engagement. To stand in for the Minister, the ministry’s Deputy Director-General  (Infrastructure) Mr Tinyiko Ngobeni shared his closing remarks starting by thanking the hosts, keynote contributors and the participants for driving a successful and informative engagement. He further reiterated that ‘’it is important that you (Activators!) help government to deal with this propagation of fake news because it affects the government’s efforts in trying to educate people about how this disease is transmitted between humans.’’

This engagement was also observed by an amazing team from Huawei South Africa – Mr Robbin Zhou (5G Products Manager), Ms Vanashree Govender (Media Manager) as well as Mr Vitto Chen, Ms Leslie, Mr Micheal  Langeveld and Mr Edison Xie of the External Relations & Communications . As normally expected with engagements of this nature, the 2 hours proved to be insufficient as more questions from Activators kept pouring showing great interest and the need for more clarity on the implementation of 5G. This resulted in confirmation of an upcoming part two of this engagement, with the date and time yet to be confirmed. 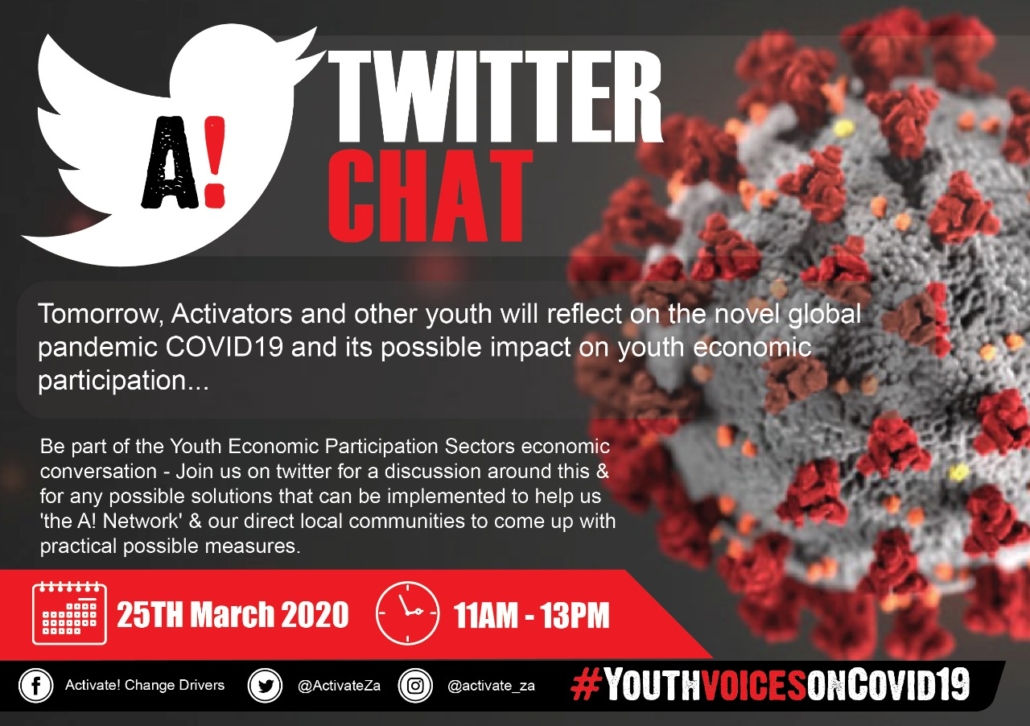 By Paul Mabote It is not something that is set to happen in the future, No; it is happening right now! The heavy and resonating…

Many of our nations, while afloat, are contracted with regards to economic opportunities. Other nations are failing to survive, and rely on limited means of trade with the world to remain afloat. Thus their industry is dependent on one sector with little to no room for the emergence of youth.