No doubt, South African youth have massive potential to formulate solutions to some of the most serious social issues today. Often, the challenge becomes identifying conducive spaces where these powerful young minds can meet regularly and engage. Enter Activate! National stations, innovative spaces designed to provide resources, information and opportunities as well as strengthen connections between Activators and other young people. From May 4th 2019, no less than 26 such stations were launched across the country, a feat made possible by Activate’s Provoke team and the hard working respective station managers.

Activate! be the cure!

Activator and station leader Hlubikazi Sanqela from Alice in the Eastern Cape says the youth in her community are not empowered enough to become active citizens or to be able to take up opportunities when they present themselves. She aims to use her station to intervene in this regard, by introducing programs focused around youth and women empowerment.

Another Activator, Kgotatso Mathebula from Bushbuckridge in Mpumalanga identified a lack of a resourced space or hub for young people as a challenge in his community. That as well as the need for a leadership dedicated to enhancing the educational level of his fellow young people. He hopes, through his station, to create an educational environment that encourages the full personal and professional development of young leaders in Bushbuckridge. Thatha!

The Stations are Fixed and Mobile

Activate! national stations come in two forms, fixed stations which are resource centres aimed at empowering Activators beyond the ACD training programme, as well as mobile stations, which are “informal meeting spaces identified by Activators as connection points for engagement.” These spaces include pub, restaurant and community church venues.

Activators and other young people from the Clau Clau fixed station in Mpumalanga spent the day of the launch discussing ways to make a fixed station work, as well as its potential benefits to young people and Activators. Member of the Provoke team Mzwandile Msimang was present at that particular launch. His colleague Nathacia Olivier also paid visits to various station locations including Ekurhuleni and Pretoria.

Be my Guiding Eyes

Activator and A! Station leader Phathuxolo Ndzimande and his team arranged thank you gifts for Activators who attended the launch of their new station in Atteridgeville, Pretoria. Among the attendees was the area’s former councillor, who shared his perspective on Active Citizenry and the importance of volunteering.

2019 Activator Lindokuhle Innocent Mangokoana is one of the few station leaders who had to postpone the launch of their stations to the following week due to unforeseen circumstances. He is the chairperson of the People’s Choice Association, which advocates for the standardization of braille encoding on commercial products and packaging, literature advancement as well as advanced accommodative systems for the visually impaired.

Station leader and Activator Moses Olivier and his team launched their new mobile station at a Mc’Donalds restaurant in Benoni. He says that they also hosted a hackathon on the same day to discuss interconnectedness around issues of mental health and unemployment. One of Olivier’s expectations with the newly launched station is for Activators to exchange perspectives and learn from one another how to solve issues around mental health and unemployment. He says that he is looking forward to his team having a fixed station, where they will be able to converge more regularly, with more resources, to execute their plans for youth development.

The Stars of the show

Words from the leadership

Malusi Mazibuko from the Provoke team had this to say to the Station leaders “We would like to extend a big thank you on behalf of communities and young people who might never get a chance to say thank you to you for the work you do in your communities. Today was a sign that when young people with a common goal of doing good come together, they can actually achieve more.”  Malusi says that they as the Provoke team hope that this is the start of something great and that they will do their best to support the newly launched Activate! Stations and that they need patience from Activators as they strive to do the best they can possibly do.

By Lwazi Nongauza ‘’Where there is no human connection, there is no compassion. Without compassion, then community, commitment, loving-kindness, human understanding, and peace all shrivel.… 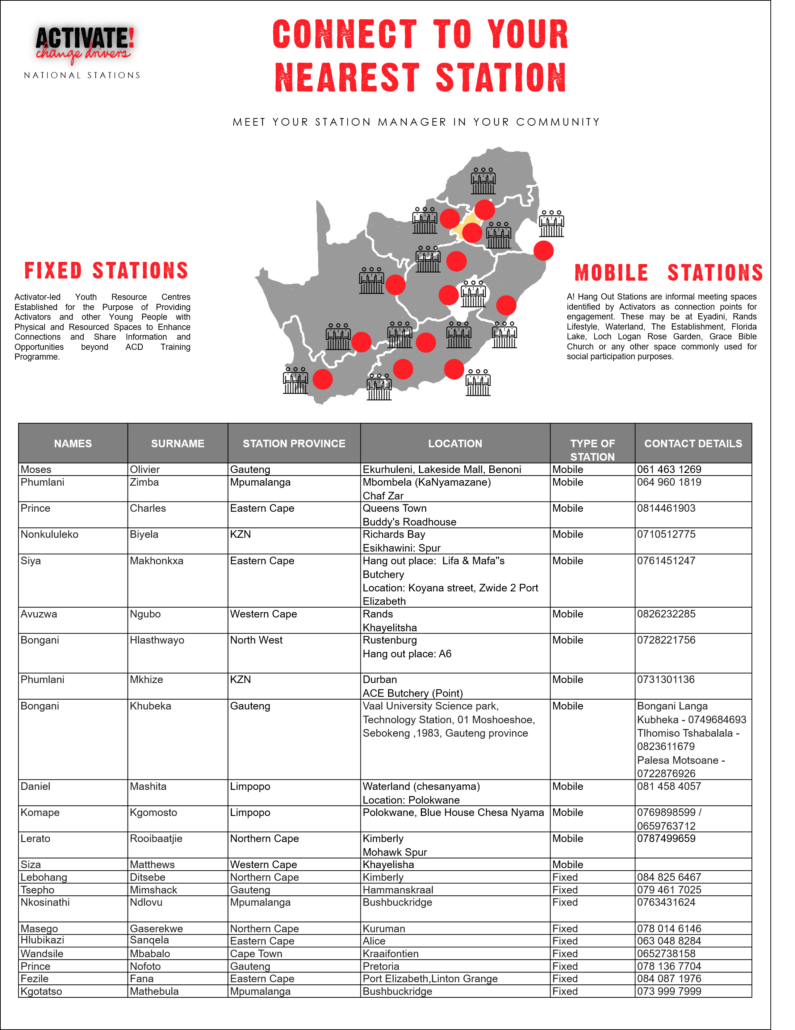