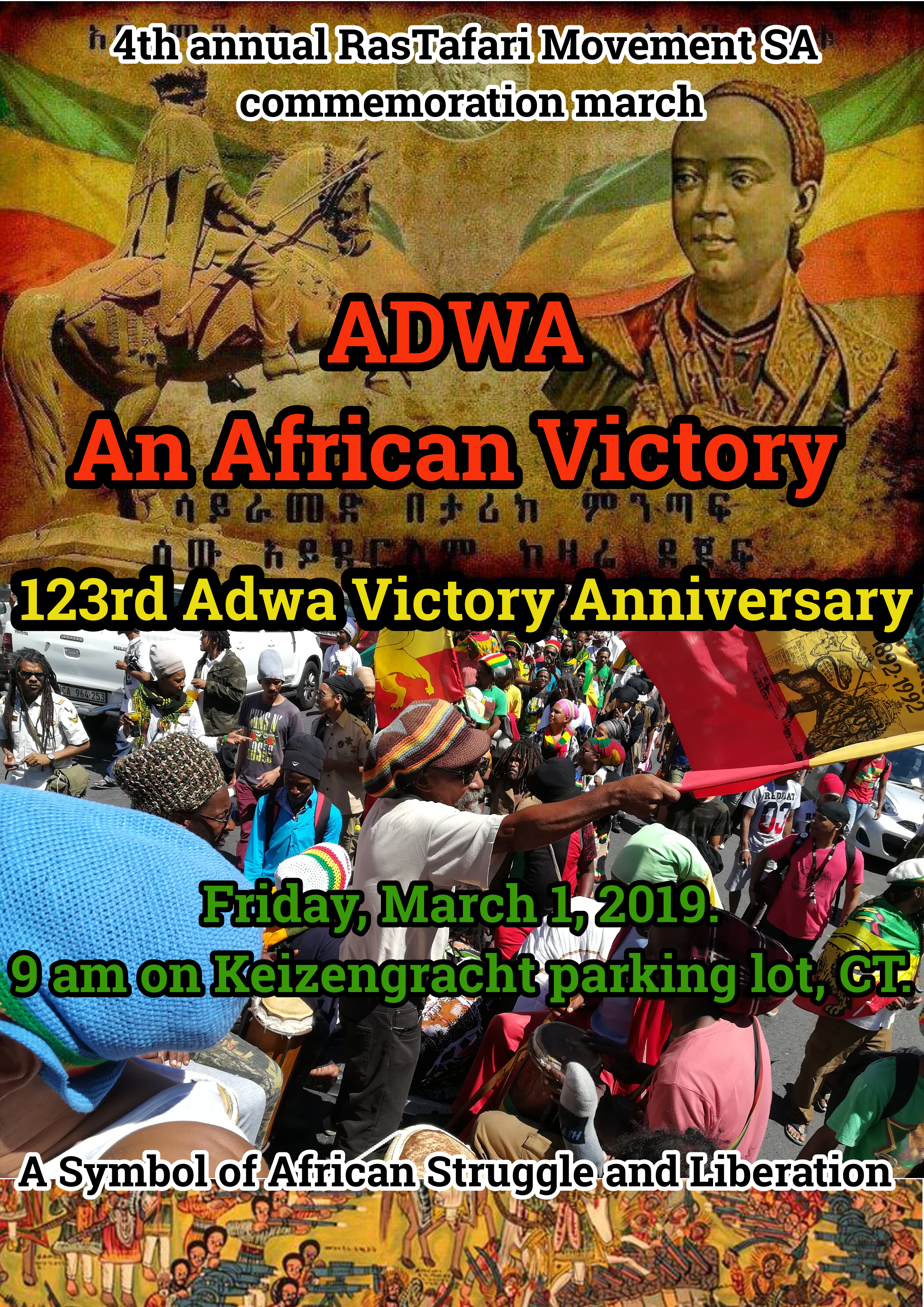 The RasTafari Movement of South-Africa (Azania) through an association of various organisations and collectives, invites the public to attend Adwa Day march to Parliament.

The Community-based event commemorates the 123rd anniversary of the Ethiopian Victory against Italy at Battle of Adwa 1896.

It is also an occasion where the Leadership of the RasTafari movement in SA highlights the marginalisation, discrimination, criminalisation and victimisation of RASTAFARI adherents in South Africa.

The delivery of our memorandum of grievance to the secretary of the speaker of the South African parliament is the highlight of the Rastafari’s Movement’s programme of event to mark Adwa Day Rastafari Nation March 2019. This will include a legal protest March from Kreizengracht parking lot down to Parliament where the Government will be receiving the memorandum from the Rastafari Movement’s ambassador.

Rastafari Ambassador and activist lawyer Gareth Prince who has been at forefront of the legal battle against the State to decriminalize Cannabis is the main speaker at this historic commemoration.

Leaders from the various organisations involved will make short addresses in commemoration of Adwa Day Victory and also the Plight that Rastafari people face under the current government.

The Commission for the Promotion and Protection of the Rights of Cultural, Religious and Linguistic Communities (CRL) has done a research on Rastafari Religion and culture advocate the report recommendations done in 2011-2012 by the name of “Challenges faced by Rastafari communities in South Africa.

On 18 September Deputy Chief Justice Raymond Zondo handed down the Constitutional Court’s decision to decriminalise the personal and private use of cannabis, ordering the Government to legislate new laws around recreational and sacramental use of cannabis. The RasTafari structures involved in these judicial matters with the state have not received any feedback, 4 months after the judgement, from the various portfolio committees and ministries of the government who are liable for criminalization of religious practice, socioeconomic oppression and civic marginalization of RasTafari adherents.

A key demand of this march is the inclusion of a delegation, from the collective that is organizing the march, be part of the legislative process for the new law on personal use of cannabis.

Adwa Day Rastafari Nation March, which falls on 1st March annually, this is the fourth year of the march and the 123rd Anniversary of Adwa Victory Day which is an official holiday in Ethiopia. This is a day to affirm and reflect on the only independent African nation that defeated the European colonisers, RASTAFARI being a Movement that is Ethiopic in its Worldview, ideologies, philosophies and frames of reference to culture, spirituality, arts, knowledge, consciousness and beliefs

The purpose of the Events:

Cape Town City Bowl: the National/Intracontinental event for Adwa Day will take place from 28 February with a night Vigil on Kreizengracht parking.

1 March the event starts 9 am on Kreizengracht parking lot.

Last year we were more than a 1000 but this year we have making greater efforts to mobilise communities across South Africa.