ACTIVATE! Change Drivers, a network of young South Africans, is testament to the possibilities of realising a better South Africa by 2030, as contemplated in the National Development Plan. From 26 to 28 October 2016, the Network embarks on a bus journey at key historic sites in Eastern Cape and Gauteng. During this journey, 36 members of the Network, known as “Activators” who hail from all parts of the country will attempt to reconnect with the past so they can understand the present, in order to elevate their work towards a vision for a country of their longing.

“This journey isn’t just about being at these sites, but it’s also about sharing hope and inspiration that a vibrant network of young leaders exists and so many great things are coming out of it already,” says Chris Meintjes, CEO of ACTIVATE! Change Drivers.

The journey will form part of a new three-part reality television reality, #Activating2030: A! Journey, produced by Urban Brew Studios. It will cover topics such as roots and identity; black consciousness and leadership. Here’s what the journeuy will look like:

“This platform will allow me to interact and engage in a dialogue of a different nature and on different issues that we hardly talk about. The journey also provides a platform where Activators can showcase how they are trying to change communities,” says Lisa Silwana, an Activator who will be participating in the Eastern Cape journey.

A social media campaign, including a live blog (www.activateleadership.co.za/journey) of the journey as it unfolds, will track these activities over the duration of the tour, taking the debate to a national level and co-creating a vision for 2030.

The ACTIVATE! Bus Journey is only five days away and promises to be a journey of discovery; unearthing a narrative that will map out a country envisioned for 2030. 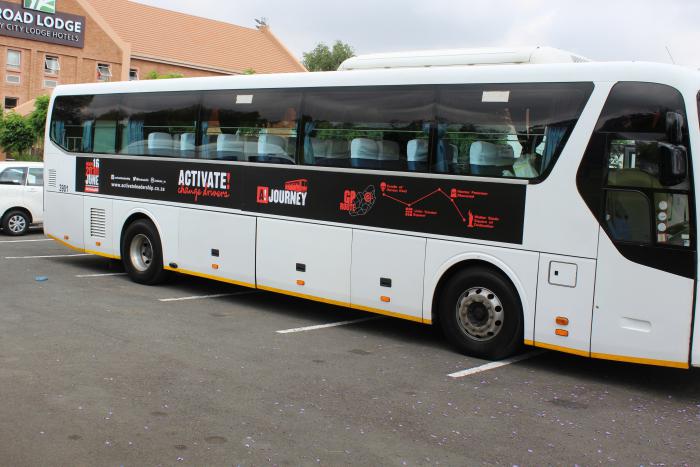 Mmeza Gaborone from Upington who participated in the Gauteng leg of the ACTIVATE! Journey, reflects on what the journey meant to her.